The Legend of Lavell Chisum, Creator of Chief EZ Liner 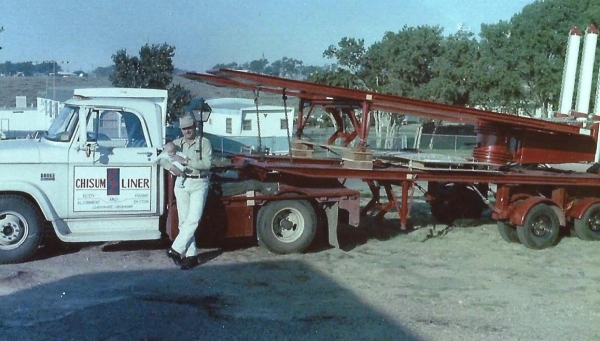 Chisum manufactured the EZ Liner for many years before selling the patent to Chief Automotive in 1972.

If there were a Hall of Fame for the inventors of collision repair equipment, there would be a whole wing named after Lavell Chisum, 92, the creator of the Chief EZ Liner.

With rudimentary tools and a lot of common sense coupled with a burning passion to create things, Chisum's frame machine is being used in body shops all over the planet. 2018 marks the 50th anniversary of Lavell taking the legendary original EZ Liner frame machine to market.

The story all began when Chisum's scholastic career ended at fifth grade because of his father’s travels throughout Texas to fix cars in the 1940s, which wasn't ideal for his school schedule, he said.

"I must have changed schools 13 times, which sure didn't help anything. My dad was going around to small towns and fixing their wrecks,” Chisum said. “But there weren't many cars in each little town, so he'd have to drive to the next one and fix their wrecks."

Chisum's journey took him through a handful of states as a youth, including Alabama, Texas, New Mexico, Oklahoma, Colorado and even Alaska, among others. At age 18, he was working for body shops during the week while competing in rodeos on the weekends, he said.

"I would go to shops to get work and they would tell me that I wasn't old enough,” he said. “Age doesn't have anything to do with it, I told them, and pretty quick they could see I knew what I was doing. For nine years, I was a bull rider on the rodeo circuit and I got good. After working with all of those body shop owners, those bulls never scared me at all."

While running a shop in Anchorage, Alaska in the 1960s, Chisum began to see a definite need for straightening frames precisely and quickly, so he started looking around for a viable solution.

“I had it all in my head for several years before I invented it," he said. "One day, I thought if this thing works, boy, it would help me. I was not doing the kind of quality work that I wanted to, so I started coming in on weekends and designing the machine."

At first, Chisum drew lines on the floor of his shop to lay out the machine and then began experimenting with different set-ups and configurations. Then he ordered some metal and a hydraulic pump and began using it in the shop. Rather quickly, Glacier Lincoln Mercury in Anchorage brought him pickups to straighten and soon, they wanted one of his machines for themselves.

"The people at the dealership hired me to operate the machine at their shop, and that was a great place to test it and develop it even more,” he said. “I did that there for a full year, and then started looking around for a facility where I could mass produce them. I made the first few in my front yard and my neighbors weren't real happy about that, so I began looking for somewhere else to build them."

To show the world his new invention, Chisum decided to crash the party at an automotive equipment show in Los Angeles in 1968.

"There were six or seven frame machine companies there, so I talked to all of them, including Bear, Marquette, Whitney and Guy Chart," Chisum said. "Nobody got excited about it, except for one guy from Minneapolis who understood what I was doing. They had a machine that was too big and it required a pit in the ground. He took me up to his suite at the trade show and showed me what they were doing with the Marquette machine, and I thought, ‘Mine is better!’ So, I began working with a company that started making the machines for me."

So, after selling everything that he owned in Alaska and relocating to Minneapolis, Chisum hit the road to see if shops were actually using the EZ Liner. When he discovered that shops didn't even know about the machine, he realized that the company in Oklahoma building his machines wasn't out there selling them. So, he went to a series of banks trying to get enough money to make them himself, and finally got lucky at the First National Bank in Claymore, OK, which gave him $5,000.

Once he got his funding in place and took responsibility for the manufacturing, Chisum’s EZ Liner took off, and today is one of the most popular frame repair systems ever made. Chisum was honored as the Inventor of the Year in 1982 by the Patent, Trademark and Copyright Law Section of the Oklahoma Bar Association, in addition to winning other awards for his invention. Today, it is used in body shops in all 50 states and throughout the world. In 1972, he sold the EZ Liner's patent to Chief Automotive, and two years later the company wanted to return it back to Chisum, he said.

"They were having some trouble marketing it, but then they went out and hired a fella named Dick Mullen, who was a great sales rep and really turned it around. Pretty soon, the EZ Liners started selling like flapjacks,” Chisum said.

Previous Page Continue reading »
Read 6125 times
More in this category: « Why Are Shops Shedding Their Marketing Efforts? Too Many Shops Advertising When They Should Be Marketing »
back to top