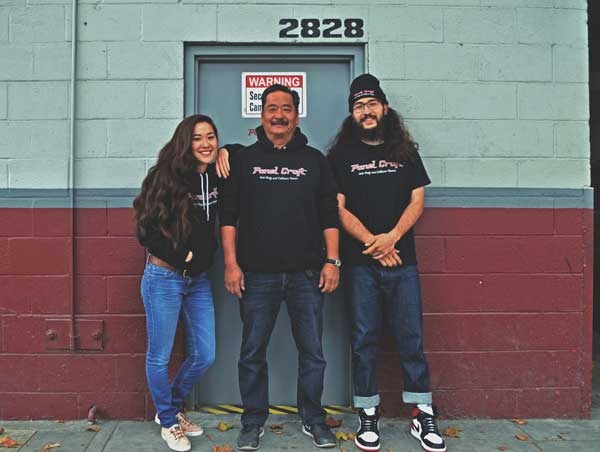 He started as a high schooler with a one-piston compressor on wheels and by 18 years old, had a small shop with one employee. Four years later, he opened Panel Craft. By working hard and learning everything he could on his own, Habu was able to take his passion for classic cars and use it to fix vehicles for his customers throughout the East Bay. He calls himself self-trained, but Habu's work is well-known throughout the East Bay for being precise while focusing on the customer, rather than simply placating the insurance companies.

One of his Yelp reviews said it best when Vijay R. wrote, "Dave isn't a big city shyster, he's just an honest guy who grew up in an honest town at an honest time.  Talk to him and you get the feeling that he's always been that way and doesn't appear that he has any need or desire to change."

However, change is on the way, and Habu is prepared for it. Now, with seven employees and his two children, Brianna, 25, and Brenden, 22, on staff, Habu has undergone a Renaissance and is finding a new purpose for his business, he said.

"To be honest, I was thinking about winding this business down and retiring, because I have been in this industry since I was 16," he said. "But, when I saw that my children might want to get involved and eventually take over the shop, I found some new energy and decided to stay in it to work with my kids."

Brianna and Brenden are now an integral part of the business, but it was not a path their father originally anticipated.

"They started helping out around here when they turned 18, but I never wanted them to have careers in this industry, because it can be a roller coaster at times," Habu said. "But, they seemed to like it and they want to learn, so I figure, why not?"

With Brianna concentrating on the front office while Brenden manages the shop floor, Dad has served as a mentor for his kids, and now they have plans to open a second location in the nearby city of Oakland.

"Brianna is very good at organizing, and she's got the ability to work well with people," Habu said. “Brenden has a knack for everything technical, and I think he was born with it. He never went to school for it, so it's intuitive and it's been great, because he is bringing all of this new technology to the shop."

Not exactly known as an early adopter to technology, David Habu is now being a little more open-minded about things such as computers and automotive diagnostics.

"For many years, I fought it all---the computer, management systems, the Internet---I figured I knew it all anyway,” he said. “But, my kids have helped shed a different light on this business and it's helped us. I still do write some things down once in a while, but I'm getting better!"

To fast-track their growth and impending expansion, the Habu family decided to join the California Autobody Association (CAA) to become more involved in the industry and network with top shops all over the Bay Area, Brianna explained.

"We want to be on top of everything, because we realize that eventually the smaller shops will be fading away if they don't stay current," she said. "By joining CAA and meeting these successful people, we are associating ourselves with the best shops in the area. We have attended several of their events since joining, and we love the idea that these other shop owners are willing to help us."

One valuable lesson Dad has taught his children is to do repairs the right way without being coerced by the insurance companies.

"We don't have any DRPs here, and we're making more money without them," he said. "I am not afraid to tell them that if you want me to fix the car the way you want me to, then you can warranty the vehicle. But, then they tell me that they're not repairing the car, we are. If I am going to warranty that vehicle, I am going to do it right and usually I get exactly what I want. I've lost money fixing cars correctly quite a few times, but we're not ever going to skimp on quality to save a few bucks, because it's the only way I know."

By networking with other professionals in the collision repair industry throughout the East Bay, Habu is able to survive without DRPs.

"I have relationships with the local car dealerships, service writers, mechanics and techs at other shops and other people attached to the industry, and they give us referrals,” he said. “When someone recommends us, that's an obligation to the customer and to the person who referred us for the work. We take that very seriously."

David Habu is transitioning from a boss to a mentor and he couldn't be happier, because his children are learning a trade he's been doing his entire life.

"I am seeing it all now through their eyes, and that is wonderful," he said. "I am going to support them every step of the way and do everything I can to set them up for ongoing success."

View the embedded image gallery online at:
https://www.autobodynews.com/index.php/ed-attanasio/item/13768-veteran-shop-owner-energized-by-son-and-daughter-at-panel-craft.html#sigProId9431671971
More in this category: « Young Painter Creates 'Girls Behind the Gun' to Support Women in Collision Repair Why Are Shops Shedding Their Marketing Efforts? »
back to top