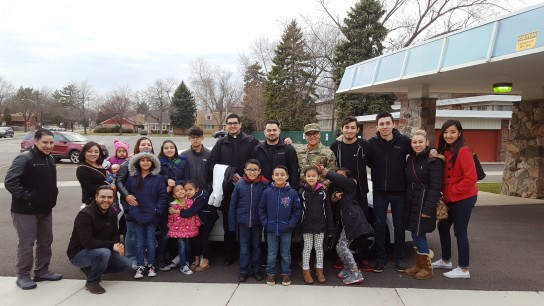 Midwest Auto Body decided to give a car to a worthy recipient, and as a result, local Catholic seminarian and missionary Marco Franco got a 2006 Mercury Milan from this shop in Melrose, IL.

Last year, I interviewed Jose Esquivel, the owner of Midwest Auto Body in Melrose, IL about his journey into collision repair.

Unlike most people, he entered the field as a shop owner with little or no exposure to the industry, but by working hard and receiving help from his father and two brothers-in-law, Esquivel was able to succeed in a tough and highly competitive market.

During that interview, Esquivel said that he was ready to get involved in some type of philanthropy, although he was still deciding what to do. He had always had a goal to help his community in the village of Melrose Park, a suburb of Chicago, and now he was ready to act.

Esquivel's first project involved working with local kids when he mentored and trained 30 young people at his shop to introduce them to automotive repair and teach them rudimentary skills last year. "We started a mentoring apprenticeship program where the kids come here to the shop to learn the basics," Esquivel said. "It started as part of a program at our church where they help troubled youth, and out of the 30 kids we worked with, four of them are working in some capacity in the automotive field right now."

Esquivel said that by teaching young people in the community how to do basic mechanical repair, they can believe in themselves and be empowered to do bigger and better things. He also wants to instruct his own children (Jessica, 16; Andre, 13 and Gabriella, 8) on how to do things such as changing fluids, tires and brakes, just to name a few.

"If they can learn how to do these things, they will start feeling like they can do anything--their confidence goes through the roof," Esquivel said. "I can see my son growing and learning about this industry and starting to show some genuine interest, so that is a wonderful thing."

To take his philanthropic efforts to the next level, Esquivel gave away his shop's loaner vehicle to a deserving member of the community. "Giving back is great for the soul and helps me to sleep well at night," he said. "My folks showed me that helping people is more important than all the money in the world. Now that we're doing well and the cars keep coming in, this is the right time for us to step up and do the right thing."

He already knew that he wanted to present a car to someone, but Esquivel wasn't having any luck finding a worthy recipient until divine intervention made everything clear. "We were trying to figure out who we should give the car to and wanted someone who would get the most out of it," he said. "We immediately thought about Marco, a missionary that was working at St. Domitilla, our church. He was finishing his schooling and had to travel 40 miles round trip from the school to our church. So we decided to give him the car. Now he can do his missionary work without having to worry about taking public transportation."

Esquivel donated his shop's 2006 Mercury Milan to the cause, but first it would need a little TLC to get it looking good and running well. "It had a few little dents here and there," Esquivel said. "So I got a group of 12 teenagers through the youth group I started a while back to do the work on the vehicle and they did an excellent job. We changed the brakes and put on a new bumper and then all of the kids came back to the shop when we gave the car away. It was an exceptional experience for these teenagers and very satisfying all around." 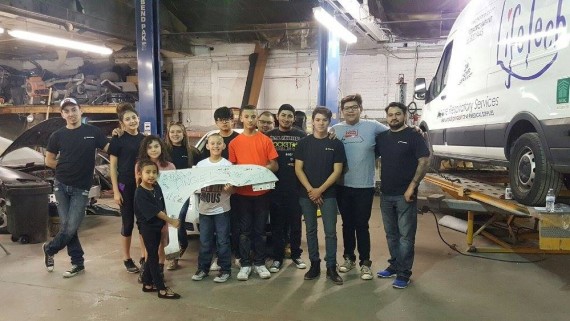 The recipient of the donated vehicle is Marco Franco, who is training to become a Catholic priest at the Mundelein Seminary at University of Saint Mary of the Lake in Mundelein, IL. Four years ago, he answered the call and moved to Illinois from his home of Guadalajara. Learning English was one of his first goals and getting regular transportation was only a dream, until now. "I have always wanted to become a priest, even when I was a small child," Franco said. "To pursue my missionary work while attending school, I was taking the bus or the train to get to St. Domitilla and then back to the seminary, so I was spending a lot of time traveling back and forth. Now I can spend more time doing my missionary work and that is why this car is such a blessing!"

Now that Esquivel and the people at Midwest Auto Body knows what it feels like to help others, will he continue on his path of philanthropy? "Most definitely; we learned a lot with this car giveaway, so we know more about how to organize it, that's for sure," he said. "I am grateful to be succeeding in this business and if I can help others, I feel an obligation to do what we can."

Read 2207 times
More in this category: « Day Job/Night Job: Body Shop Office Manager Is Just Starting to Rev Her Engine Young Painter Creates 'Girls Behind the Gun' to Support Women in Collision Repair »
back to top