Do You Have the Next Great Body Shop Invention? 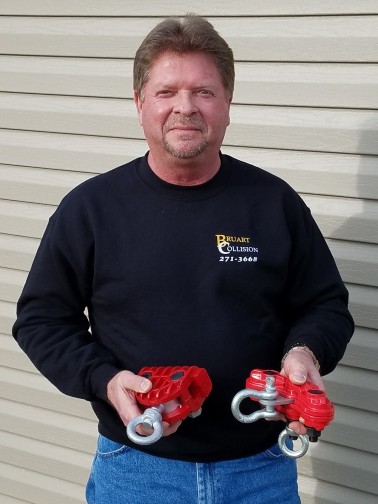 Brad Weschler, the owner of WeschTools, is the inventor of numerous collision tools, including four currently in development.

A former tech develops equipment that can help technicians to work more efficiently. The son of body shop owner develops an app that goes viral. We read stories like these all the time and they're always inspiring. Collision professionals who think outside of the box and are willing to chase their dreams have created tools that many body shops use today.

But for every brilliant invention that comes out of the collision repair industry, how many other great ones are left sitting on desks or buried in filing cabinets? And if you think your idea is the "next best thing," how can you patent it and get it to market without someone stealing it from you or wiping you out financially as you try to develop it?

To find out the ins and outs of patenting and manufacturing collision repair tools, we interviewed Brad Weschler, the founder of WeschTools of Baiting Hollow, NY. While the owner of a small body shop, Weschler's ideas became sketches, drawings and eventually prototypes before taking each one through the arduous patenting process.

The inspiration for any invention can come around anytime or anywhere, Weschler explained. "My first product idea for WeschTools was the Quick Stick that came to me while I was in bed in 1996, so I got up immediately and wrote it down," he said. "I knew when I woke up, it would be fresh in my mind, and it was. Over a period of time, I came up with new ideas to make the Quick Stick even better. I knew then that I had something special and felt it was important to protect the idea until I could figure out my next steps. But it took two years to develop it and test it and then another two years to get it patented."

To immediately protect himself and his idea, Weschler did what is known as a "poor man's patent." "I knew I had to prove that I was the first with this idea, so I made copies and put the original drawing and notes into a self-addressed envelope, sealed it, and then sent it to myself," he said. "When I got it back, I left it sealed and put it away in a safe location. The postmark proves the date of my idea, like a time stamp."

Now it was time for Weschler to find a good patent attorney, and luckily he found one with an engineering degree who had spent five years in Washington D.C. working as a patent examiner inside the department of patents and trademarks.

"My attorney first sent me a full disclosure form to complete and return to him as soon as possible to protect me from potential theft of my idea," Weschler said. "His initial fee was $1,200 to begin the search process to find out if other patented products that resembled mine in any way existed. In the end, it cost me $15,000 for that first patent. Over time and with continued product development, I received an additional seven patents covering this single product which increased the cost by an additional $25,000."

After everything is submitted, it's a long waiting game, Weschler explained. "Once my application has been filed at the patent and trademark office in Washington D.C., my product is declared “patent pending” and secured with a patent serial number. Patent pending allowed me to move to immediate manufacturing, marketing and selling my first of many products. In my case, I received some great advice and suggestions that I applied to the product which improved on my original idea. In my case, with no additional disputes or conflicts, I was granted my first of 13 patents."

Now the successful inventor of numerous collision tools and with four more currently in development, was all of the hard work worth it, we asked Weschler? "Absolutely, because I have the satisfaction of knowing that I invented a patented product [that is] unique and unlike anything else out there," he said. "I'm proud to know that this product will save my fellow body collision shop owners’ time and money while increasing profits. That first patent provided me the template that made future patent applications easier and less stressful, and that allowed me to take more of my ideas to fruition."

For that technician, painter, estimator or body shop owner with a great idea for a tool that can change the industry, what last piece of advice would Weschler offer them? "Invest your time to find the patent attorney that will represent you and your idea in the very best way possible and then trust him. Don’t expect your attorney or others to clearly know the features and benefits the way you do, so take the time to communicate and provide detailed explanations. And maybe most importantly, don't wait. You never know when that next million dollar idea will present itself."

View the embedded image gallery online at:
https://www.autobodynews.com/index.php/ed-attanasio/item/13134-do-you-have-the-next-great-body-shop-invention.html#sigProIdf3bd6c75e5
More in this category: « There's No Free Lunch When it Comes to Your Website Metal Tech Training Program at Mike's Auto Body is a Success »
back to top