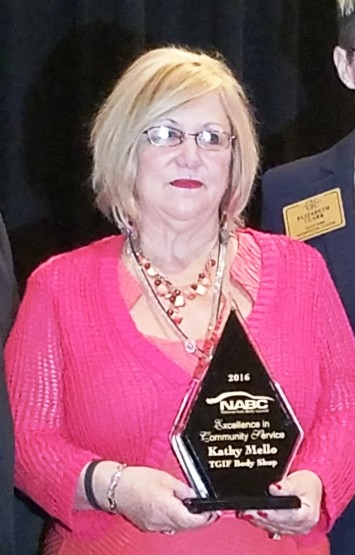 Kathy Mello of TGIF Body Shop in Fremont, CA won an Excellence in Community Service Award at SEMA last year from the National Auto Body Council for her outstanding charitable efforts and volunteerism, including mentoring at-risk youth and disabled adults.

By working hard and doing all the right things for the right reasons, Kathy Mello of TGIF Body Shop in Fremont, CA is a shining example of how good things happen to good people.

The owner of TGIF Body Shop, Inc. in Fremont, Mello is well-known both locally and nationally as a top industry leader, a passionate mentor, and a person who cares about her employees and her community.

Kathy Mello and her husband Richard have owned TGIF since 1980. Right on the edge of Silicon Valley, the City of Fremont has changed dramatically since then, but the Mello family still fixes cars the same way, although the equipment and techniques have evolved considerably within the past 37 years. Today, this burgeoning shop employs 20 people and repairs over 100 vehicles every month.

It all began when Richard Mello, Kathy's husband, was working at Moffett Air Field in Mountain View, CA on the graveyard shift. He had a hankering to paint cars, so during the day he began working with an independent shop in a car dealership. That owner decided to opt out of the business and Mello was the only one left standing. When the owner of the car dealership found out what had happened, he looked around at all of the cars in the shop and told Richard, "You're it!" He eventually sold that shop and began TGIF in 1980.

While Richard was trying to start a new shop with his "two hands and a toolbox," which is the way Kathy likes to describe those early years--she was raising their four children. “I was working behind the scenes back then. I was running parts, collecting payments, and helping with marketing.” But after a while, the shop began to hit its stride and Kathy had to step in when things got busy, she said. 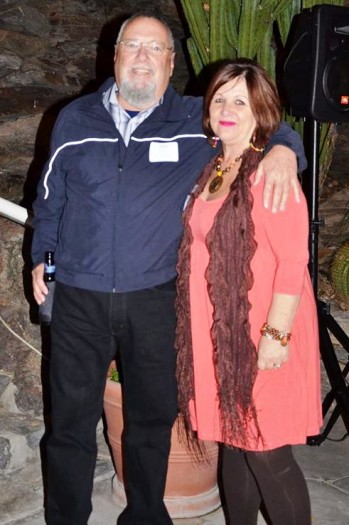 Mello (pictured with her husband, Richard) is this year's CAA State President and a founding member of WIN, the Women's Industry Network.

"Then, in 1996, we bought a new corner location and our volume increased by at least 20%. Right around that same time, my kids were getting older, so I started doing more in the business."

After setting up the office and systemizing everything from work orders to payroll, Mello began learning everything she possibly could about the collision repair industry. "I learned a lot by doing, but I also took classes whenever I could. At this point, we had 18-20 employees and I was working here full-time."

Full-time went to double time when Richard decided to step away from the business to transport hot tubs, which meant it was now "go time" for Kathy. "I knew I had to take the reins, so I didn't hesitate," she said. "My son, Jason Cocco, runs the shop now, but I am still very involved in every aspect of the business."

Part of her participation involves a lot of industry networking and philanthropy, and that's why she recently received an award at last year's SEMA for the latter. The National Auto Body Council honored her with the Excellence in Community Service Award for her outstanding charitable efforts and volunteerism, including mentoring at-risk youth and disabled adults.

In addition, she is one of the founding members of the Women's Industry Network (WIN), a not-for-profit organization dedicated to encouraging, developing and cultivating opportunities to attract women to collision repair. Back in 1999 when the group was formed, Mello and several others saw a need for such an organization and jumped in almost immediately to play a role.

"We were attendees at a first women’s conference 12 years ago. There were 44 women in attendance and they all started talking to each other and sharing ideas," she said. "I was one of their first co-chairs and since then, WIN has really taken off, with more than 400 members from every segment of collision repair across the entire United States, as well as internationally. There are so many smart and dedicated women in this industry and I am so proud to be a member of WIN, which is still an all-volunteer organization."

By the time this article appears here in Autobody News, Mello will be sworn in as the new State President for the California Autobody Association (CAA) as they celebrate their 50th anniversary. After serving on the organization's board in different capacities, Kathy is poised and prepared to take on the position.

"Most of the board members, who have served tirelessly for many years, are eager to add new blood to the organization. One of the first things I want to do is encourage the younger generation to step forward," she said. "The right people are out there, so we have to figure out a way to connect with them. One of my goals is to make membership and involvement easier, so that more shops will join. When I go to a chapter meeting, whether it's in San Jose or the East Bay, it takes 4-5 hours out of my day, with traffic, etc., so we are going to look at the possibility of doing the meetings online or at least videotape them so that members can watch them later. One of our main purposes is to get important information to our members, so we need to find a way to do that more effectively as well."

Mello's charitable causes are numerous and varied, but her main focus is on tech students in this industry, community outreach and working with troubled youth. "From day one, we've been striving to help people who need it," she said. "Young adults ages 18-28 often get lost in our society today, but by encouraging them and providing them with opportunities, they can excel, and I've seen it time and time again."

With her eyes on a better future for the collision repair industry in California and nationally, Kathy Mello isn't going to slow down or cut back on all of the things she does. "I am blessed to be in a situation like this and in an industry I love. So I will be here as long as I can, to help who I can and to provide solid employment for my amazing crew."

Read 1784 times
More in this category: « Vallejo Body Shop Gives Away its 11th Car Not Just a Cause, But a Way of Life for Lefler Collision & Glass »
back to top