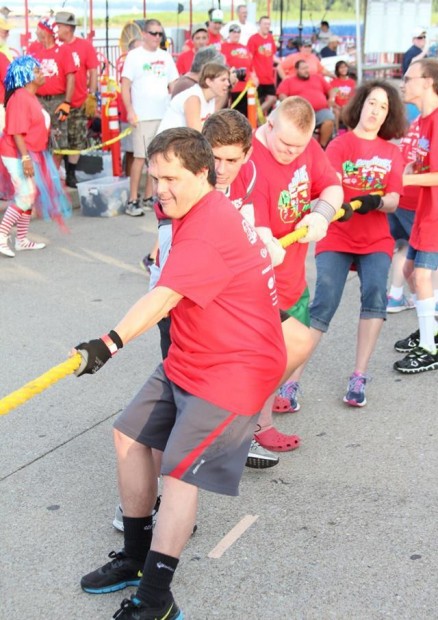 Well, those two annoying little teenagers have been running the show at Randy's Body Shop since 2008, repairing 80 cars monthly with a crew of 20 people. Brad is the vice president/GM and Kyle runs the backend. Brad's wife, Vanessa, manages the front office, and hopefully one of Brad's two sons, Cody and Clay, will eventually step up to make this a third-generation business.

Randy's Body Shop is proud to be serving the people of Paducah, and that's one reason why they have never forgotten their connection to this small town of 25,000 people. If there is a local charity that needs some help and assistance, the Wiersma family is willing to help, because they really care about fulfilling their civic obligations to the community. The money raised from the event goes to the local Special Olympics, and several teams consisting of Special Olympians always compete in the pull.

Every year, Randy's Body Shop works with the Special Olympics as part of Kentucky’s Big Brown Truck Pull, held every summer on Paducah's Riverfront. This event has raised more than $300,000 since its inception eight years ago. The shop's participation in the event is in honor of Kyle and Brad's brother David, 32, who is a Special Olympics athlete. Funds raised by the event are donated to the Special Olympics to provide year-round physical fitness opportunities for individuals in Kentucky with special needs.

People from the surrounding areas come out for the Big Brown Truck Pull annually, where they watch teams from the community as they pull a large UPS truck 12 feet. "Whoever can pull it the fastest wins, and they always get a big crowd for the event," Brad Wiersma said. "They have all kinds of teams competing, including a youth category, where they pull a UPS van instead of a truck."

With a brother who has been competing in the Special Olympics for many years, playing an integral role in the Big Brown Truck Pull is satisfying for the family in several ways. "It's a big deal, and every time I see these athletes out there, it is definitely exciting," Wiersman said. "Every year at the event, some Special

Olympians get up and talk about how their lives have been changed by the Special Olympics, and if that does not get you going, nothing will. We have seen how the Special Olympics have enhanced David's life, so we believe in it and love supporting it."

Brad Wiersma and his brother Kyle have succeeded in a tough business because they listened to what their father said and did as they grew up in the shop. "My dad always told us to watch our costs and never spend more than you take in," Brad said. "Always leave money available to invest into your business and remember that the focus should always be on the customer."

His advice must have worked, because success for the shop came quickly and gradual growth followed. The senior Wiersma moved his shop to an 11,000 square foot building in 1991, and today, the business has grown into a multimillion-dollar operation. Everyone comes out for the Big Brown Truck Pull to watch teams from the community as they pull a large UPS truck 12 feet. Photo Credits: VUE Magazine

As Randy's Body Shop continues to grow, Brad and Kyle are continually looking to improve the business. The shop began offering routine clinics beginning with a Women's Car Clinic in 2010, and now they sponsor Young Driver's and Parents Clinics that are offered in conjunction with local insurance providers to educate young drivers about the importance of proper vehicle maintenance. In addition, Randy's Body Shop gained its certification for child seat installations, which makes it the first and only private organization in Paducah that is certified to offer car seat installations.

Doing charity work helps to bring more business to the shop, but that is not why the Wiersma family supports the local Special Olympics via Kentucky’s Big Brown Truck Pull. "It does help, because people see us out there and they often mention it when they bring their vehicles in here to be repaired," Wiersma said. "We all win by doing these types of things, and if we get a few more cars as a result--I won't argue with it. But that's not why we do it, and I think most people realize that it's all coming from the heart!"

Brad's father opened his shop 34 years ago, more out of necessity than anything else. He kept destroying his own vehicles, so he figured that if he could fix them himself, he could save some serious cash. Dad must be proud of the fact that his sons have continued his legacy while giving back to organizations like the Special Olympics.

Read 1337 times
More in this category: « How Do You Get the Customer from the Street to the Shop? WyoTech is Now a Half-Century Old and Still Thriving »
back to top