Day Job/Night Job: Mixing Paints During the Day and Cocktails at Night 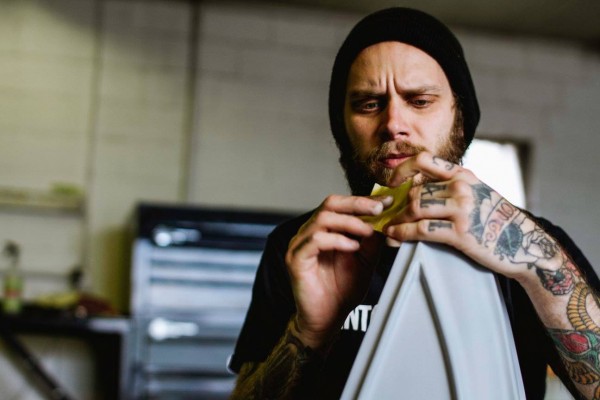 Sean Fitzgerald is only 33, but he's already owned Phantom Autobody in Jeffersonville, IN for three years now.

Sean Fitzgerald, 33, has a busy work schedule as he balances two jobs--body shop owner and bartender--but he makes it all work because he stresses quality in everything he does. While running the show at Phantom Autobody in Jeffersonville, IN, he is a hands-on owner who still paints most of the vehicles that come into his shop. And after his 10-12 hour days fixing cars and doing custom paint, he is off to work as a bartender to help him pay the bills.

Fitzgerald started working initially in the printing industry, but he always had his sights on painting cars and making them look spectacular.

"I was working as a printer during the day when I was 18 and 19 and then in the evenings and on the weekends I was building street race cars," he said. "We would install turbo kits and do everything we could to make them as fast as we could. All of my friends had their own cars, so we had this group that would work on each other's vehicles."

With bigger plans and a drive to get there, Fitzgerald decided to go back to school to get a degree in collision repair.

"I went through UTI's one year program at their school in Houston, TX," he said. "It was intense with more than 9-10 hours of instruction and lab work every day, but when I graduated from there, I was ready to get a job at a shop."

Returning to the Louisville, KY area where he grew up, Fitzgerald started working at a local shop to learn more about the trade.

"I worked as a prepper for four years and they never let me paint an entire car, mostly door jambs and things like that," he said. "It was a very competitive environment there, so all of the painters were fighting for work."

Because Fitzgerald was cross-trained as both a painter and a metal technician, he decided to start working at another shop in Louisville as a body tech. "

I did that for 2-3 years, but it never really became full-time, so that's when I started bartending. It helped to pay the bills and it also allowed me to sock away some money, because I started thinking about possibly opening my own shop around that time."

At first, he didn't have a permanent location and that's why people began calling it Phantom Autobody.

"I started by doing side work in the evenings and on the weekends," Fitzgerald said. "We would do it at the shop I was working at or anywhere we could. We really didn't have a real location, so I named it Phantom Autobody and it became an inside joke." After borrowing some money from his friends and selling three of his beloved cars, Fitzgerald got his facility and an address in 2013.

"I put together almost $25,000, with some savings from the bartending thrown in there too. We started on a very small scale first and now we have four employees and operate out of a 10,000 square foot facility. We do full collision repair, but we don't have any DRPs, so it is pretty much word of mouth."

By knocking on doors and stressing excellence, Phantom Autobody has grown steadily.

"We do a lot of work for a local car dealership that closed their own collision center a few years back," Fitzgerald said. "Now that we have a permanent location, things are really picking up."

At first, things were a little rocky, so the bartending became a way to keep the bills paid. "I was working at the shop all day long and then bartending at least three nights a week to make ends meet," he said. "I still work on the weekends as a bartender, because it's easy money. Occasionally, one of my customers at the bar will become a customer at the shop-either for collision repair or a car restoration or even some custom paint."

Although Fitzgerald is a skilled painter and does a lot of motorcycle builds featuring his custom paint, he still feels like there is room to learn and grow.

"Some people say I am an artist, but I don't think of it that way. I just enjoy doing custom work and that's where my interests really lie. We fit it in, but we make sure that it does not interfere with the collision repair or overwhelm our production by doing it."

Does Fitzgerald have a five-year plan for himself and his growing business?

"We want to grow and fix more cars," he said. "There is a lot of competition in this area, with shops that have been around for 15-20 years. So, I am still the new kid on the block."

Will he ever be able to step away from the bartending and be able to enjoy his weekends every once in a while?

"I don't know, I like doing it and I'm good at it, so no--I will still be working at that bar mainly on the weekends until I decide it's enough. The bartending helped to get me here, so I'm not ready to retire just yet."

Read 2461 times
More in this category: « Women Shop Owners and Female Consumers Get Help from AskPatty.com Do Vehicle Wraps Make Sense for Your Shop? »
back to top