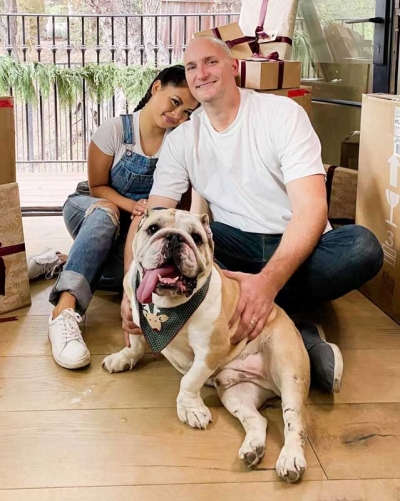 Nathan Simmons, pictured with his wife, Joyce, and bulldog, Winston, co-owns C&C Collision in Alhambra, CA, and has been growing and selling Bonsai trees for the past two decades.

Nathan Simmons has co-owned C&C Collision in Alhambra, CA, for 23 years, and has worked hard to help the company grow.

During the same time, he has been able to build a healthy side business that is also growing---Bonsai trees, a passion that has turned into much more.

During the week, Simmons manages 14 collision professionals with his co-owner, Rett Comer, a childhood buddy who worked with him painting cars in Simmons’s garage when they were 16 in South Pasadena.

“One day, I asked my mom if I cleaned up the garage, could I paint cars in there and she said yes,” Simmons said. “I don’t think she realized that we were going to turn it into a little business. We put tarps everywhere, drywalled it and hung lights and after a while, we got really good at it. We started painting all of our friends’ vehicles until one day some guys in suits dropped by.”

The city’s chief fire inspector and other officials informed Simmons in a very direct way his little business was no longer in operation.

“We tried to tell them this is not a job, just a hobby, but they weren’t buying it,” he said. “The City of South Pasadena wasn’t thrilled about what we were doing and they told us they could fine us as much as $5,000 a day, so we had to shut it down.”

That experience was unpleasant, of course, but it planted a seed in their minds that eventually led to the establishment of C&C Collision.

“Maybe we can actually pursue this,” Simmons said. “So, we started saving our money and began improving our skills by going to Citrus College in Azusa, CA, to learn more about fixing cars. We realized that we already knew most of the information, but we wanted to learn as much as we could.”

The duo purchased an existing shop and jumped in with both feet.

“Going from the garage to running a full-blown business with employees was a big reality check, and it got a little scary,” he said. “We realized that we had to make a minimum of $35,000 just to keep the doors open, but we always figured out a way to do it.”

The shop moved several times before landing at its current location...