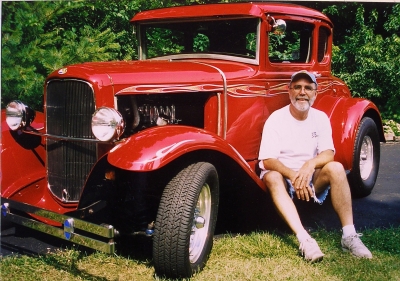 If you've been to a classic car show, you've likely seen Alan Johnson's work more than a few times.

By taking his experience in custom paint and expanding on it, Alan Johnson has made himself well-known for many things---such as his blossoming fine art career.

He's also an author, a teacher and known as one of the world's leading experts in pinstriping, a unique art form that is 100 percent American. He is 71 years old and has his work placed in art galleries all over the world, while still going strong with no plans to retire. Johnson's motto, which he tells anyone who's interested in learning the craft of pinstriping, is to "just get the brush." That is what he enjoys doing every day.

Originally from River Plaza, NJ, Johnson worked his way through the Newark School of Fine Industrial Art in the 1960s by painting, airbrushing and lettering everything from fresh produce signs to cars at the local Raceway Park. His first shop was in a greenhouse at Julie's Farm Stand on Route 35 in Middletown, NJ, where he refined his skills on cars, motorcycles, guitars, helmets, boats, skis and even airplanes.

In 1968, he began his career as an Art Director at a New York advertising agency, working on big national campaigns. Six years later, he decided that the commercial art world was not where he wanted to be, so he moved his family to the country and started his own business. His studio, Alan Johnson Grafix, is located in a restored barn and grist mill that was built in 1825. With all of his children grown up and out of the house, Johnson spends half the year in his other studio in Loveland, CO, so he can be near his sons and grandchildren.

Today, Johnson is continually sought after for his 40 years of experience as an independent pinstriper and custom auto artist. He is a consultant for automotive paint and brush manufacturers and writes a series of "How To" articles for trade periodicals. He has his own line of signature brushes with the Mack Brush Company and is the author of How To Pinstripe, published by Motor Books in 2007.

Johnson has been invited to Finland, England and Scotland to demonstrate and pass on his knowledge of pinstriping, and enjoys sharing his skills with budding painters all over the planet. His book has been the definitive step-by-step guide on how to perform a wide range of pinstriping projects, including information on how to prepare surfaces and how to experiment with asymmetrical design.

Assisted by his wife, Judy, Johnson is able to dedicate all of his time to creating award-winning masterpieces that adorn vintage auto and boat restoration projects that have appeared in museums and private collections all over the country. Every year, he organizes and participates in five charity events, raising money primarily for children through the Make-A-Wish Foundation and the Special Olympics. He is also one of the original organizers of the "Pinheads", an elite group of master pinstripers. In 2009, he received the Pinstripe Legend lifetime achievement award for his unique artwork in the Kustom Kulture world.

After painting on cars and boats for many years, Johnson decided to stretch his wings artistically when he began painting other images in his studio in Loveland, CO. Today, he sketches and paints southwestern landscapes and other subjects with bold colors. His experimental painting techniques and unique color sense are utilized in his fine art painting, all of which are well-known for their spiritual nature.

"I decided to try other things, and it has really taken off from there," he said. "I sell a lot of posters now through Fine Art America, and that is very satisfying. I still love custom painting cars, but this stage in my art career has really been amazing."

2017 has been a great year for Johnson, full of activity and great reviews. Earlier this year, he painted and donated his artwork to two car shows---Pinstripe Legends in Milwaukee and Brush Masters in Chicago. Exciting projects that he completed recently include a gold leaf lettering job on a 1929 Packard Speedster; gold leaf lettering , airbrush and pinstriping two restored 1960s Gassers for Ida Automotive; gold leaf lettering on restored classic wood boats, a 1934 Packard for Pebble Beach Concourse at Stone Barn Restorations.

In addition, Johnson said he instructs young artists on pinstriping and encourages them to pursue their creative sides.

"I really enjoy teaching and showing people how I do the pinstriping,” he said. "Pinstripers and lettering people often tell me that my book is the best written on the subject, and of course that is very satisfying. Initially, I had to actually look at my hand to see how I do the pinstriping, so that I could relate it to other people. I had been doing it for so many years, I had to sit down and think about how I could write about the process so that readers could understand."

With 42 years under his belt (or easel), Johnson looks back, but only for a moment.

"I'm just a kid from the New Jersey shore who got this ability from God, so I love sharing it and experimenting with new projects and new techniques all the time," he said. "I give these young people a brush and a panel and show them how to convey their personality through the art. What can be better than that?”