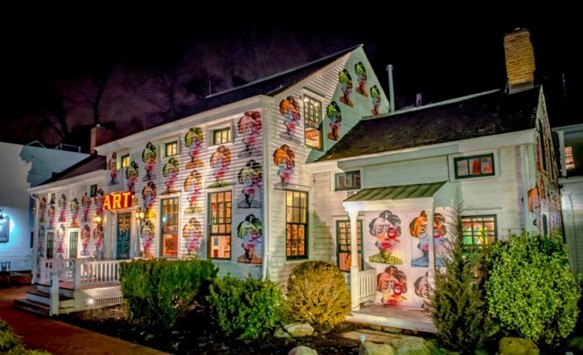 Taking a mansion that was built 207 years ago and turning it into a piece of graffiti art was the brainchild of Joe LaPadula, the owner of Martino Auto Concepts in Glen Cove, NY. Photo credit: Sean Basdaranos

Glen Cove, NY is a beautiful, laid back coastal town on Long Island and is well-known for things like its annual sailboat races and free summer concerts.

Last year, when Joe LaPadula, a body shop owner, bought an abandoned, centuries-old mansion in Glen Cove with big plans to renovate it, it barely made the local news. But when he decided to work with 150 world-renowned graffiti artists to cover the entire building with their art both inside and out, it created a buzz that led to a big story in the New York Times and got the locals talking.

LaPadula buys and renovates old buildings in Glen Cove, so when he got the chance, he bought a 9,000 sq. ft. local historical landmark. It was originally owned by J.H. Coles, one of the first five families of Glen Cove that dates back to 1810.

His initial plan was to reopen the mansion as a restaurant, but after renovations were postponed, he got some Andy Warhol-like ideas. "I bought the building a year ago and was trying to figure out the best way to use it," LaPadula said. "No one wanted it because of the age and the fact that part of the structure is an historical landmark, but I liked it. Then I got the idea of just blasting it with graffiti throughout the entire building. I figured after a while, I could start my renovations and cover it all up and that's when it really took off."

For a partner in this artful endeavor, LaPadula immediately thought about Sean Sullivan, a renowned Bronx-born graffiti street artist with whom he had collaborated on other projects over the years. "Sean and I did some art cars and other things in the past, so I knew that he was the right person to work with me on this project," he said. "I told him that the building was in pretty bad shape, but we decided to cover the place with graffiti anyway. We covered some of the floors and beams to protect them, because it is vintage wood and started letting the artists in to do their magic."

After the artists were done with their work and the house was ready for the world to see, LaPadula had an opening party attracting 1,200 people. Some people in Glen Cove didn't like the way it looked and there was a little pushback until the New York Times and local TV stations showed up in force to cover the opening party. "The mayor told me to paint the outside of the building after the party, which we gladly did, so now we're looking for our next move with the interior."

Although LaPadula planned to make his graffiti exhibition only a placeholder before converting the house back into a restaurant, he is now thinking about making the building a museum where visitors can enjoy the graffiti and street art.

LaPadula, 48, grew up in the collision business and has always had paint dust in his veins, he explained. "Forget about it, I grew up working at the family gas station in Jackson Heights and I just kept rolling from there," he said. "My grandfather was in the business and my father after him, so I'm three generations in this industry."

Twenty-six years ago, LaPadula jumped into the collision repair industry in a big way, which is the only way he travels. Today, Martino Auto Concepts operates out of a 25,000 sq. ft. facility and employs 24 people. The shop is Mercedes-Benz, Audi and BMW-certified and specializes on working on luxury, high-end vehicles.

LaPadula knows from experience that his various activities in Long Island end up promoting his shop and leading to further business, he said. "It's difficult to market collision work to the consumer. It's like going to the doctor, there's nothing there to glorify. I have always been around custom work and I like doing it, but really I do it to advertise my body shop. I do it through my custom work and charity car shows and now I work heavily with the art community. We've done two arts cars--a Ferrari and a Lamborghini--that really put me on the map. Our art cars get a lot of attention and as a result, my shop gets a lot of free publicity, so it works well. Plus, they have given me a lot of other opportunities to be in car shows, curate art shows and market my main business through all of these other avenues."

Does LaPadula consider fixing crashed cars a form of art? "Absolutely," he said. "Collision repair is under appreciated. We get these cars with airbags blown and wires everywhere and now we have to put them back together, guaranteeing their safety and a quality repair. And then after we've done all of our work, they just get back in the car and take it for granted. I joke with my artist friends that the only difference between the two of us is I get paid for my work. My people are artists, no doubt, and I tell them that all the time."

LaPadula's graffiti art mansion is not currently open to the public, but so many people were impressed by his creation that they want to partner on this project with him in some form or another. So stay tuned.