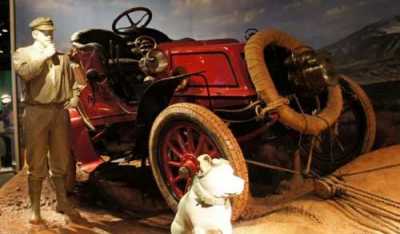 Nowadays, San Francisco and New York City are separated by a seemingly endless maze of roads that traverse the United States in many directions.

In ideal conditions, the shortest, fastest possible route would take approximately 48 hours of non-stop driving. The current record for the fastest transcontinental drive from New York to Redondo Beach, Los Angeles, was set in October 2013 by an automotive enthusiast named Ed Bolian: He managed to complete his drive in 28 hours, 50 minutes, and 26 seconds, which seems ridiculously fast even in today’s terms.

In the early years of the 20th century, when cars were still a rare and awe-inspiring sight on American streets, a continuous transcontinental drive seemed like an impossible stunt. Cars of the time were slow and extremely unreliable; there was only a small number of mechanics who were skilled enough in car anatomy to repair even the smallest malfunction, most of the roads were unpaved, and there were no gas stations or roadside garages. However, all this didn’t stop Horatio Nelson Jackson, a physician and automotive enthusiast, from choosing to embark on the journey and succeeding in becoming the first pioneer of transcontinental driving.

In the spring of 1903, at a time when many people thought that the automotive industry had no future and that cars were merely an invention aimed at fun, Jackson accepted a $50 bet to prove that it was possible to drive a car from San Francisco to New York City. Since he had no experience in car maintenance, he invited a young mechanic named Sewall Crocker to join him. They purchased a 1903 Winton touring car, which they named “Vermont,” and began their long and exhausting voyage, which was plagued by numerous accidents and setbacks.

One of the car’s tires popped after they had traveled only 15 miles, and they had to replace it with the only spare tire they had. Also, somewhere near Sacramento, their cooking gear fell off the car and the unfortunate men didn’t even notice that it was missing until some 50 miles later.


Throughout the journey, they lost a number of personal items, including reading glasses, hats, various spare parts, and some of their provisions. Furthermore, the car broke down several times, and they were unfortunate enough to run out of fuel in the middle of nowhere. Crocker borrowed a bicycle and pedaled for 25 miles to reach the nearest town and buy four gallons of fuel.

Finally, since there was no official map of America’s roads, the two men had to rely on incomplete maps of cycling routes and the directions given to them by locals along the way. At one point, a woman intentionally gave them wrong directions and sent them more than 100 miles off course just so that her relatives in another county could marvel at the sight of a car.

Despite the many frustrating obstacles they were forced to overcome, they remained in good spirits. Near Caldwell, Idaho, they purchased a pit bull pup named Bud who became their loyal companion and entertainer. Since their car had no roof and no windshield, the men noticed that the dust from the dirt roads bothered Bud’s eyes, so Jackson redesigned a pair of driving goggles to fit the dog’s eyes.

By the time they reached Mountain Home, Idaho, they had become celebrities. Newspapers across the nation reported of three goggled companions who embarked on an unprecedented adventure: stories of their travels immediately prompted more wealthy automotive enthusiasts to try and repeat the men’s effort.

Jackson, Crocker, and Bud arrived in New York City on July 26, 1903, almost 64 days after they had left San Francisco. Upon completing their journey, Jackson and Crocker became the first American automotive enthusiasts to prove beyond doubt that it was possible to traverse the entire nation by car, and Bud became the first automotive celebrity dog in history. He later moved in with Jackson and his wife Bertha in Burlington, Vermont.

Jackson won the $50 bet, but that money seems like a measly sum in comparison to the whopping $8,000 he spent on car repairs during the trip. In a way, the first automotive transcontinental journey across the country foreshadowed the future of the U.S. as the nation of powerful cars, long journeys, and seemingly endless roads.

Read 2564 times
More in this category: « Aston Martin To Build 25 James Bond DB5 Replicas With All of 007's Toys One of the Last Cars Burt Reynolds Signed Is in KY Body Shop »
back to top