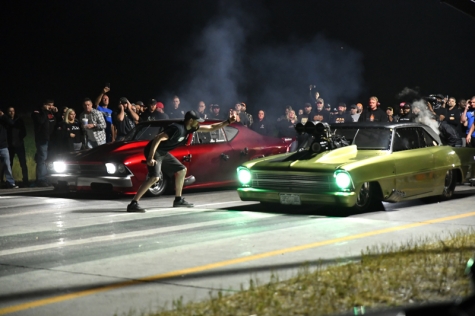 ...on one road in Scottsbluff, Nebraska to “go all in” on the most gigantic Cash Days in STREET OUTLAWS history. And, for the first time in almost three years, longtime rivals JJ Da Boss of The Memphis Street Outlaws and Big Chief of The 405 share the screen and the road, making this a can’t miss opportunity.
This double elimination event, broken into brackets, means winners take home $5,000 per race and $100,000 for the final race. But unlike other competitions, if a driver has a bad night of racing, it’s not totally over – they can come back and win the entire thing via the “losers bracket.” Will Daddy Dave capture his fifth title and add another notch to his illustrious Cash Days belt? Can Big Chief finally grab that elusive crown he has been seeking for almost a decade—or will it be one of the other 60+ worthy racers who drive home with the money as mega cash days king?

Share This:
« Previous Page Continue reading
Read 2800 times
More in this category: « The 405 Is Back Stronger And Faster Than Ever With A New Season Of Street Outlaws Premiering January 11 at 8pm ET/PT on Discovery Murder Nova vs. Leroy Azavedo | Street Outlaws: Mega Cash Days 102 »
back to top