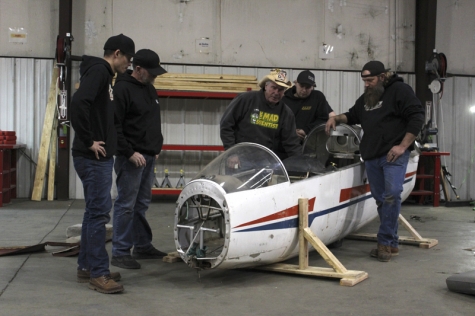 New Series Kicks off with a Sneak Peek August 3 Featuring A Never Tried Before Dragster Zamboni Build with the Vegas Golden Knights Among Others.

In Street Outlaws, Farmtruck and AZN are synonymous with crazy antics and wacky builds. And recently, they’ve been working on a new batch of creations unlike anything the viewers have seen before. While production was halted on their top-secret mission due to the Corona virus, our favorite zany and wild duo couldn’t keep what they were cooking up to themselves.

Taking their work to new heights, the fun-loving duo have been laboring non-stop to bring their fans new and epic builds. Through their “Farmtruck and AZN Camera,” the guys take us on a self-shot tour of the shop, reminiscing about some of their craziest moments and giving audiences a peak at the current status of the builds that will be featured on the all new series STREET OUTLAWS: FARMTRUCK AND AZN.

The two-hour special event premieres MONDAY, AUGUST 3rd at 9pm ET/PT on Discovery Channel, with the new series to begin airing at a later date.

In addition to watching STREET OUTLAWS: FARMTRUCK AND AZN on Discovery, viewers can join the conversation on social media by using the hashtag #StreetOutlaws and following STREET OUTLAWS on Facebook, Twitter, and Instagram.

With the help of Jeff Lutz and his team at Lutz Race Cars, Farm Truck and AZN provide the backstory behind each new endeavor, showing the beginning process for all of these “Farmtruck style” builds. From dangerous attempts at creating an Air Cannon Car, to partnering with the Vegas Golden Knights and the NHL Network on a wacky dream of drag-racing a Zamboni machine the Farmtruck and AZN way, to their longest running desire to create the Haunted Hearse, this brand-new series ups the crazy ante of builds thus far.

For more information go to: Discovery.com/shows