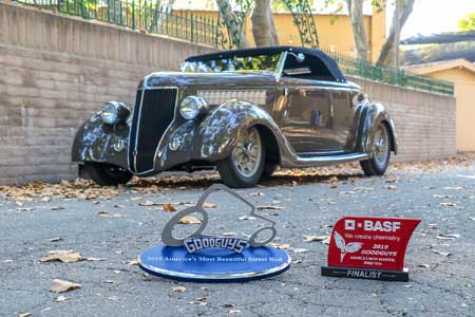 The recent Goodguys West Coast Nationals Show presented by BASF at the Alameda County Fairgrounds in Pleasanton, Calif., showcased a long list of award-winning cars, including the crowned “America’s Most Beautiful Street Rod.”

Earlier this year, the roadster was also awarded the America’s Most Beautiful Roadster trophy at the Grand National Roadster Show in Pomona, Calif.

Other finalists for America’s Most Beautiful Street Rod were:

“We are excited to sponsor the West Coast Nationals and reward these talented individuals for their outstanding work,” said Tina Nelles, BASF Marketing Services Manager. “Events like these allow our customers to show the world why they choose our paint, not just tell. I am extremely proud of each winner this year.”

Read 483 times
More in this category: « Equalizer Partners with Arsenal, a New Subscription Box Service New Season of Street Outlaws: No Prep Kings »
back to top