‘ToyMakerz’ Star David Ankin Shares Message With Youth: 'If You Can Dream It, You Can Build It' 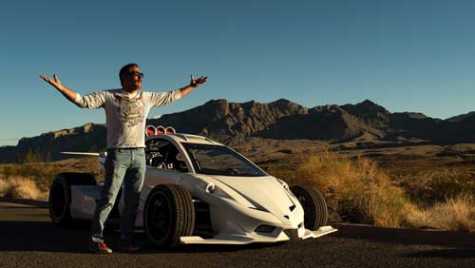 David Ankin, a former stunt driver and racer, recently traveled to San Diego, CA, from his hometown of Reidsville, NC, to attend a special event aimed at showing kids that more is out there than their screens.

More than 30 kids came out to Speed Circuit, a new in-door go-kart facility in San Diego, to help promote the season three premiere of Ankin’s series on HISTORY®.

During the event, Ankin shared his message "If you can dream it, you can build it" and demonstrated ways to keep kids’ screen time down and activity up. He also showed his support for the cancer charity Team Parker for Life by partnering with The Speed Circuit to donate 20 percent of the night’s proceeds to the charity. Team Parker for Life works to boost the morale of kids battling cancer, raise awareness of the disease and be a voice for the children in their fight.

The new season of “ToyMakerz” premieres March 10 at 9 a.m. ET/PT on HISTORY® during the DRIVE block, an auto enthusiast programming block on A+E Networks, then again for an encore airing the following Saturday, March 16 at 10 p.m. ET/PT on FYI®. During each episode, Ankin leads his team in crafting one-of-a-kind custom automotive builds, from hot rods and classics to muscle cars, trucks and motorcycles.

“’ToyMakerz’ gives car lovers across America a front-row seat to the incredible building process behind these powerful and unique machines,” said Ankin. “It’s going to be an exciting season of builds for sure … some of the fastest and most unique cars and motorcycles ever made, and then driven to the extreme!”

Autobody News recently reached out to Ankin to find out more about the new season of “ToyMakerz” and how he is spreading his message to kids.

Q: How did you get involved in the industry?

A: Growing up, we didn’t have a lot of money. We spent a lot of time finding interesting cars to work on and figuring out how to make them drive. This industry was a natural fit. My father was a tinkerer and built hot rods and cars, and my grandfather did the same before him. I guess it was in my blood.

View the embedded image gallery online at:
https://www.autobodynews.com/index.php/companies/item/17234-toymakerz-star-david-ankin-shares-message-with-youth-if-you-can-dream-it-you-can-build-it.html#sigProId3f8f55b872
More in this category: « 'Garage Rehab' Takes On Its Most Meaningful Project to Date Longtime Diamond Standard Test Expert George W. Neat Passes Away »
back to top