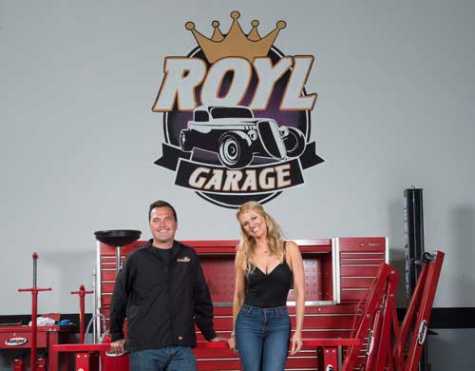 Courtney Hansen hosts “The Ride That Got Away” with custom car designer and builder Troy Ladd.

Every car lover has the one that got away, according to celebrity car enthusiast Courtney Hansen.

Whether it’s the car they grew up riding around in with their parents, the first car they purchased or the dream ride they had to sell when they fell on hard times, Hansen’s goal is to reunite car lovers with their beloved rides in her new television show “The Ride That Got Away.”

A self-described “pit kid,” Hansen grew up in Minnesota spending much of her time at racetracks and garages. Her father, Gerry Hansen, raced at Formula Race Car Club of America (FCCA) and won 27 national championships throughout his career. Her family also owned Brainerd International Raceway in Minnesota.

Growing up in the automotive world, Hansen said, she quickly became an enthusiast.

“Cars are in my blood, and I’m thankful that I was able to parlay my love for cars into a TV career that started 15 years ago,” she said. “Here I am now, executive producing my latest project and one of the characters on the show. It’s all very exciting.”

Hansen then hosted 10 seasons of Powerblock/PowerNation for Spike TV and later four automotive shows for NBC Sports and CBS Sports in which she showcased million-dollar rides, rare classics and “tricked” vehicles.

In Hansen’s newest project, she is the executive producer of History Channel's auto-themed TV series “The Ride That Got Away,” which premiered in January. Hansen hosts the show with renowned custom designer and builder Troy Ladd under the brand ROYL (Ride of Your Life) Garage.

Autobody News recently talked to Hansen about her new show, the advice she offers young women interested in the automotive field and current industry trends.