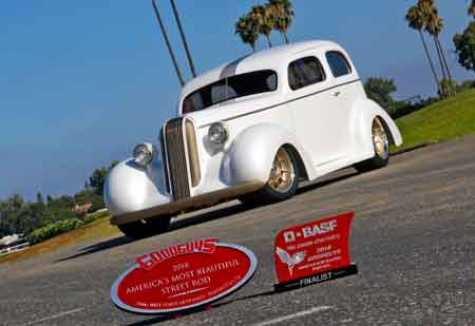 1936 Pontiac Sedan, “Pindian,” winner of the Goodguys Most Beautiful Street Rod presented by BASF at the Goodguys West Coast Nationals on Saturday, August 25, 2018 in Pleasanton, CA.

The recent Goodguys West Coast Nationals Show Presented by BASF at the Alameda County Fairgrounds in Pleasanton, Calif. had a slew of award-winning cars present, including the crowned "America’s Most Beautiful Street Rod."

Robert Anderson’s 1936 Pontiac sedan “Pindian,” was awarded Goodguys Most Beautiful Street Rod presented by BASF. The sedan had its debut earlier this year at the Detroit Autorama where it clinched a spot as a Great 8 finalist for the Ridler Award.

Other finalists for America’s Most Beautiful Street Rod were

In addition, “Granny,” a Glasurit-painted 1969 Chevy Camaro RS/SS and featured in the BASF booth was named as the Goodguys Cool Camaro. This vehicle was painted by BASF Technical Service Specialist Eladio Mendoza and built by Mendoza and owner and friend Ron Roach with single-stage Glasurit 22 Line.

“It was an honor to sponsor the West Coast Nationals and connect with car enthusiasts and those who have such strong passions for the aftermarket industry,” said Tina Nelles, BASF Marketing Services Manager. “And what a pleasant surprise for our own Eladio Mendoza’s build to be recognized as the Goodguys Cool Camaro.”

BASF attended the show along with Bogi Lateiner from the All Female Build, which debuted at SEMA 2017.