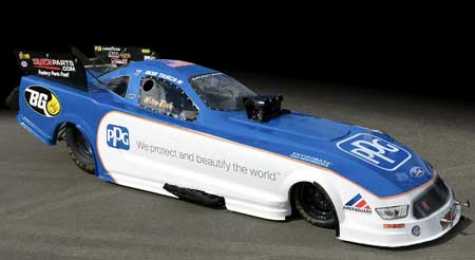 PPG is supporting Tasca Racing throughout the 2018 season.

Tasca Racing is coming home to New England. The PPG-supported team will take part in the NHRA New England Nationals set for July 6–8 at the New England Dragway — its home track — in Epping, New Hampshire.

PPG is supporting Tasca Racing throughout the 2018 season. The company has served as the team’s primary sponsor at the Southern Nationals in Atlanta, Georgia, in May and will repeat its prominent role at the New England Nationals. PPG is also an associate sponsor for Tasca’s remaining NHRA races during the year.

“PPG has been a Tasca Racing supporter since we started, and we’ve been loyal PPG customers for more than 20 years,” said Tasca. “It’s exciting to run PPG’s colors — I’m excited to have them as a sponsor. New England is where it all began for us, and coming home is a big deal. I’m hoping to see our PPG customers and racing fans cheering for us at the dragway. Racing in front of our crowd means a lot to us.”

PPG echoes Tasca’s sentiments: “It’s a thrill to be a Tasca Racing sponsor,” said Bill Shaw, PPG director, refinish marketing, Automotive Refinish. “We have a long-standing business relationship with the Tasca family, and we’re racing fans. PPG and Tasca are a natural match. You know we’ll be trackside come July 6.”

Tasca’s Shelby Mustang consistently hits speeds in the 325 mph zone in just over 3.8 seconds on the quarter mile when racing in the NHRA Funny Car category. He has won six national NHRA events. The team currently stands in the top ten in its class.

For more about automotive refinish products from PPG, call (800) 647-6050 or visit www.ppgrefinish.com.