Madison Smith To Open Her Own Shop, 'Riveting Rides' 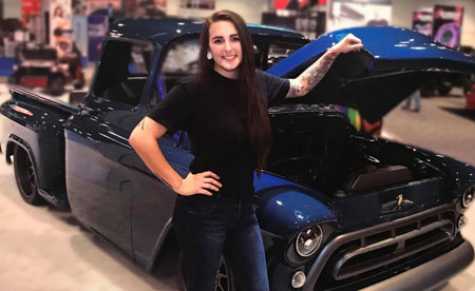 Madison Smith with the "Chevy Montage" by Bogi's Garage

It's 2018, yet it’s still tough for a young woman to break into the male-dominated auto body business.

However, Madison Smith has never, and will not, let that stand in her way. In fact, she has thrived in the business and made an impressive mark at a young age with her own shop, Riveting Rides.

When Smith was going to Milan High School in Milan, TN, she knew she wanted to pursue a career in the auto industry. She dreamed of being a mechanic like her father and grandfather. From a very young age, she loved to draw and paint. When she began painting cars, she saw the perfect opportunity to combine her two favorite things: cars and art.

She competed in the SkillsUSA Tennessee Automotive Refinish Technology competition three times. She placed second once and won the third time, becoming the first female to win.

She then went on to college at Lincoln Technical College (formerly known as Nashville Auto-Diesel College), where she enrolled in the collision repair program.

After she attended college, industry leader Kristen Felder hired her to work for Collision Hub. While at Collision Hub, she completed a photo shoot for 3M.

Felder said, "This really wasn't a photo shoot---no models, no set and no crew. Just Madison, her tools and her paint booth. We captured a moment in the life of a painter. It was exciting to have 3M share that vision and use the content we created that day.

"She holds deep to the roots of this industry through her time and work with her grandfather. However, she's also a fresh new perspective on who and what a painter is in the collision repair industry. She's kicking down doors by letting her work speak for her. It's really exciting to watch her career grow."

After working at Collision Hub, she met Girls Behind the Gun organizer Konstandina (Connie) Manjavinos. Then she went to work on Bogi's Chevy Montage, the all-female build by Bogi's Garage for SEMA 2017. Smith said she will never forget working alongside other influential women in the industry and the conversations they had about their experiences.

When contacted by Autobody News, Smith said, “BASF has an incredible team helping me out. When it was time to spray, all they had to tell me was ‘Okay, here is the mix ratio … here is how you apply it ... here you go!’ It's such an easy-to-use system. For the first time spraying a lot of BASF, I really enjoyed everything about it---the sealers, the Onyx HD waterborne base and the clear. The clear was my favorite, hands-down. It went on so effortlessly with the SATA 5000 RP. "

After SEMA 2017, Smith decided to move back home to Tennessee to be closer to her family. She landed a job at Legens Hot Rod Shop in Martin, TN.

"After leaving Legens, I ended up going on the road to work and travel,” she said. “I went to help the guys on PowerNation with a build, and I’ve been at Jason Graham Hot Rods painting a ‘54 Chevy for them. But traveling got old really quick. I wanted to be close to home, but there were no other hot rod shops near me. So I felt the time was right to open up my own shop. I worked at a body shop in high school, and coincidentally, that shop was vacant and available for rent. I talked to Keenan Hailey, one of the guys I worked with at Legens, and he was more than happy to help out with the shop. Keenan has a very impressive resume and has done body work and painted many award-winning hot rods. For now, that’s all that will be at the shop. I’m hoping to grow and eventually have a metal shop. We will be doing mostly paint and body there for now."

"When it came time to figure out a name, I reached out to many family and friends to brainstorm. My aunt came up with Riveting Rides. I immediately loved it because it made me think of the iconic Rosie the Riveter. I knew that was it. The shop was formerly named Keith Beard Auto Body Works. It was my first job in a body shop when I was still in high school. So it’s pretty cool going back to my stomping grounds. "

Read 8967 times
More in this category: « GM and Jaguar Land Rover Approve Car-O-Liner Vacuum Systems Street Outlaws: It's Time to Shake Things Up »
back to top