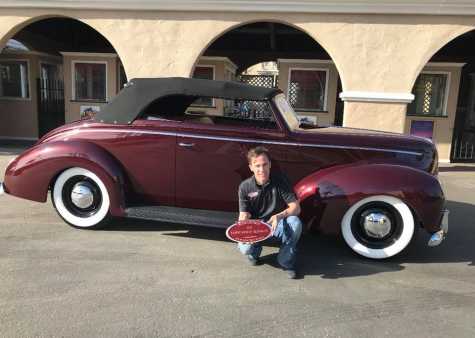 Goolsby Customs, which officially started in 2005, offers top-of-the-line turn-key builds, upgrades to current vehicles and the planning and designing of vehicle builds.

Jonathan and Vonda Goolsby decided to open Goolsby Customs together in 2004. The shop does a lot of work for other shops including paint, body and fabrication.

Jonathan has been customizing as many vehicles as he can for more than 20 years. He started at home in the garage. He then worked as the head painter for a Chevrolet dealership for more than 12 years.

Soon after being established, Goolsby Customs was able to foster the collaboration of many high-profile builds. The shop appeared in many magazine features and covers as well as several SEMA show builds.

Autobody News reached out to Jonathan for more information about his shop.

"Some people come to us with cars, sometimes we find the car for them,” he said. “It's a wide range of customers, including corporations or individuals wanting their dream car."

Goolsby Customs travels to shows across the country to showcase its customers’ cars as well as keep up on the current trends in build styles.

At the Goodguys Rod & Custom Nashville Nationals show on May 16, Goolsby Customs announced that the winner of the "Goolsby Customs YoungGuys Award" was Blaine Goitia.

Autobody News followed up with Jonathan for more information about the Goodguys contest.

"At every Goodguys event, Goodguys has a section for young guys/girls [ages] 25 and under,” he said. “Goolsby picks two of the best ones. We are interested in the story behind the vehicle. It doesn’t have to be the best car. Some of the winners have been painted only with primer. We like to learn about what drives the young people and get details about their work on the vehicles."

"It’s our way of helping out and keeping the industry going with the next generation of kids," Jonathan said.

Autobody News followed up with Jonathan for more information about the paint used by Goolsby Customs. He stated the shop primarily uses BASF's Glasurit.

"The support behind BASF's Glasurit brand is great. The basecoats and clears are superior to any other brand we have dealt with. We are able to produce award-winning vehicles with BASF Glasurit,” he said.

A Goolsby Customs build, a 1940 Ford Convertible called “Lucille,” was awarded the 2018 Street Rod D’Elegance at the Goodguys Del Mar Nationals on April 8.

Read 1376 times
More in this category: « 3M and CREF Support Veterans Through 3M Hire Our Heroes Program Misfit Garage: A Circus of Misfit Parts and Processes »
back to top