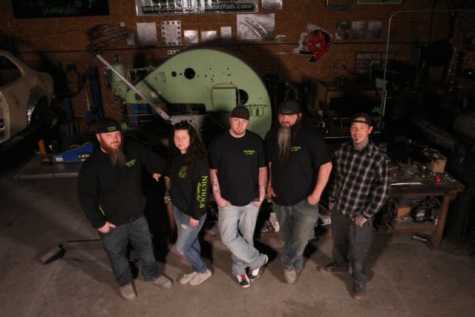 There's been a lot of excitement lately in Watseka, IL. The whole town is talking about its most famous resident, Justin Nichols.

Watseka is a small town in Iroquois County, IL. It is 15 miles west of the Illinois-Indiana state line on U.S. Route 24. According to the 2010 census, the population of Watseka was then 5,255.

Nichols grew up in Watseka and attended Watseka Community High School. He has always been interested in cars, trucks and motorcycles, as well as fixing them up and working on them. This interest prompted him to open his own shop, Nichols Paint and Fab, at 110 S. 2nd street in Watseka.

“Wrench’d” is a new show on the Velocity Channel that will show the day-to-day work of the crew at Nichols Paint and Fab. Crew members included are Nichols, Maegan Ashline, Greg Huizenga, Dave Webster, Kyle Bertsch and Nick Roberts. The show chronicles the work they do on custom vehicles for customers. The premiere of the television show will be at 10 p.m. ET on May 15. The episode is titled "Mean Green Machine."

"Mean Green Machine" refers to the Green 1960 C10 truck built by Nichols Paint and Fab. The 1,000 hp motor was built by Nickey's Performance with a Magnuson supercharger. The interior features a Glide engineering C-frame with bolstering and upholstery by Vos Upholstery. The custom chassis was built by Nichols Paint and Fab. Wilwood supplied the brakes, and the wheels are one-offs specially built for this truck by Billet Specialties.

Nichols has become well-known in the automotive world as a three-time builder on Spike TV's “Search and Restore” and for being featured twice on Powernation. His work has been showcased in Classic Truck, Street Rodder, Raw Bike, Hot Rod, Bagger, American Bagger and Built Not Bought magazines.

It was one of these magazines that was noticed by Magilla Entertainment in New York. This landed Nichols an interview with the producers of shows on Velocity. Nichols then signed the deal for “Wrench’d,” and filming began.

The TV crews were there to witness Nichols and crew working on his green 1960 C10 truck, which was featured at SEMA 2017. The truck was featured in the Valspar Automotive booth. Nichols was chosen as one of the three Valspar Automotive Matrix System "Mavericks of Color" for 2018 at SEMA 2017. The other two "Mavericks of Color" were Joe Vincent and Gary “Boogie Man” Zaborowski.

“Justin, Gary and Joe are exactly the kind of painters we love to celebrate as Matrix users,” said Pete Willman, Senior Sales Director, North America, Valspar Automotive. “These guys show a relentless dedication and commitment to what they do and to what we do as we continue to innovate in product design to give them what they need to keep on creating. To them, it’s not just about becoming a renowned painter; it’s about continually developing their skills and surpassing their work on the next build.”

Autobody News contacted Nichols about the TV show and his work with Valspar Automotive.

"As far as Matrix is concerned, I have been a Maverick of Color since SEMA 2017 and am happy to be a part of such a great company that offers such a good product,” he said. “They have been with me since before the TV stuff, and I consider them family."

Nichols invited the entire town of Watseka to a free watch party of “Wrench’d” at the Watseka Theatre, 218 E Walnut St, Watseka IL. The party will be held from 7-10 p.m. on May 15.

Mean Green Machine
Premieres on Velocity, Tuesday May 15 at 10 p.m. ET
Justin Nichols and the crew at Nichols Paint and Fab are known throughout the Midwest for their meticulous fab work and stellar custom paint jobs. Now they’re ready to put their reputation on the line and their shop on the national map with their first SEMA build, a 1960 C10 with a 6.0 ls custom motor. While they’re busy hustling to get the C10 done, a client comes in with a request for a custom metal interior for his 1938 gangster-themed Buick Special.

Bustin' at the SEMA
Premieres on Motor Trend Tuesday, May 15
Premieres on Velocity, Tuesday May 22 at 10 p.m. ET
Justin Nichols is ready to show off his fab work and the final product on his SEMA build: a 1960 C10. A longtime client also finally has the money to finish a custom turbo sportster bike.

Badass Big Wheel
Premieres on Motor Trend Tuesday, May 29
Premieres on Velocity, Tuesday June 5 at 10pm ET
A client comes in to Nichols Paint and Fab and wants to turn the engine and drive train of a 1963 VW bug into a custom bare-metal trike. Nichols finally takes some time to finish the 1962 Willy’s Jeep that his late father left as a project for them to do together.

Farm Fresh Ford
Premieres on Motor Trend Tuesday, June 5
Premieres on Velocity, Tuesday June 12 at 10 p.m. ET
A client comes into Nichols Paint and Fab with a farm-fresh 1941 Ford truck ready for an overhaul. Nichols takes a 2014 Chevy 1500 to the next level with a custom paint job on the hood.