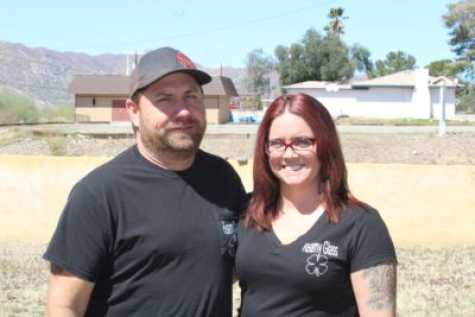 Owen and Jennifer O’Brien are the owners of Kearny Glass and Mirror.

Jennifer and Owen O’Brien are the latest owners of Kearny Glass & Mirror in Kearny, AZ.

The company has been in business for more than 30 years with an excellent rating and reputation. The Owens purchased it two years ago and are continuing the company’s tradition of quality work and service.

Recently, they performed a custom job for the Fly-In-Hi automotive shop in Phoenix as part of an episode of the popular television program “Gas Monkey Garage Rehab.” “Gas Monkey Garage Rehab” travels around the country looking for auto shops that need help.  They are one of the most popular automotive shows, along with “Fast N’ Loud,” on television. Both shows are on the Discovery Channel and have huge followings.

The O’Briens’ experience with “Gas Monkey Garage Rehab” began when Jennifer submitted the name and contact information of their company to the Discovery Channel to indicate their interest and availability if one of their programs wanted to use them. Richard Rawlings, leader of the team for the show, called them on Jan. 12. He told them he had called them because of their good past record. Owen was in the middle of a job and didn’t believe them at first. He told them to email him and send him the information. When he received a response, he called them back realizing they were the actual people from the television show.

They drove to Phoenix that Friday and spoke with Russell Holmes, the project manager for the show. GMGR wanted a set of custom double doors made and installed within a seven-day time frame. Companies in Phoenix had been called about the job, but said they could not do it within the time allowed, saying it would take at least a couple of months to get the products needed and complete the job. Owen quoted them a price, which was accepted. Owen and Jennifer did not realize it at the time, but they were being filmed during the negotiation process.

Then the difficulties began.

Being that it was a weekend, Owen couldn’t order the products needed for the project until Monday. They were unable to get their needed products until Wednesday, which left them a four-day window to get the job done. Each piece had to be custom built. They also ran into some other difficulties, which you will see in the show.

View the embedded image gallery online at:
https://www.autobodynews.com/index.php/companies/item/15350-gas-monkey-garage-rehab-to-feature-kearny-glass-mirror-in-kearny-az.html#sigProId1073814216
More in this category: « KKR, Elliott Management to exit Mitchell International Vehicles Sought for 2019 Matrix 'Mavericks of Color' Calendar »
back to top