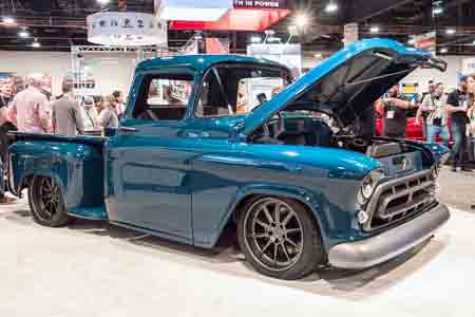 1957 Truck, Chevy Montage, built by Bogi’s Garage and nearly 100 women from all over the country. Coated in BASF’s R-M custom color, “Tenacious Teal.”

Bogi Lateiner of Bogi’s Garage and Velocity’s All Girls Garage will be joining the 2018 Women’s Industry Network (WIN) Conference in Indianapolis from May 7-9.

BASF is sponsoring Bogi’s appearance, as well as sponsoring the WIN conference for the 10th year in a row.

The all-female built Chevy Montage, an award-winning 1957 Chevy pickup truck, will be on display at the conference and is also sponsored by BASF. Bogi organized a team of nearly 100 women from all over the country, 30 percent of whom had zero automotive experience, to restore the truck. The truck was unveiled at SEMA 2017 in BASF’s booth and is coated in a custom R-M color, “Tenacious Teal,” that Bogi developed with BASF color experts.

“I didn’t grow up in this industry,” said Bogi. “And it wasn’t easy to find a place for myself as a female. Women make up less than two percent of mechanics and that is pretty consistent throughout collision. The inspirational women that took part in the All-Female Build, WIN members and the many women that came before me that made it possible for me to do what I do—we are all paving a way for the future generations of women and the future of our industry. I see our network growing steadily and I’m excited for the future and the impact we are making in the automotive aftermarket.”

BASF North American Distribution Director, Denise Kingstrom, is leading the way for industry women as well as part of the WIN board, encouraging her coworkers and customers to network and join WIN.

“It’s important for young women to see females succeeding in the workplace everywhere, but especially in collision repair, where the workforce is predominantly male,” said Kingstrom. “WIN is dedicated to attracting women to our industry and giving them a place to network; projects like the All-Female Build are a great way to showcase our ability and success.”

For more information about BASF, go to BASFrefinish.com.

Read 2842 times
More in this category: « Ringbrothers Takes a Stand Against Counterfeiters New Auto Aftermarket Insurance Provider Won’t Ding You on Premiums »
back to top