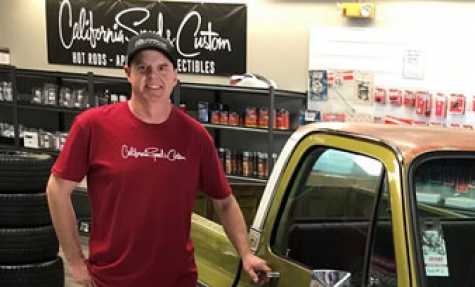 Mark Oja, head of California Speed & Custom and the leader of the A Team on Velocity Channel’s “Overhaulin.’”

3M Automotive Aftermarket Division and Mark Oja, automotive celebrity, head of California Speed & Custom and the leader of the A Team on Velocity Channel’s “Overhaulin’”, are teaming up for the upcoming AutoFair at Charlotte Motor Speedway, held April 5 through 8, 2018.

At the Charlotte Motor Speedway Auto Fair, Oja will be at the 3M Demonstration and Education Mobile Operations Trailer on Thursday, April 5, and Friday, April 6, to meet fans, sign autographs and host demonstrations of 3M solutions for body prep, painting and paint finishing.

Oja, who was born in Sault Ste Marie, Ontario, Canada, got his love of cars from his late father Alvin while watching him working in the garage. By the age of 13, Oja had painted his first car and never looked back. After a 12-year stint at a GM dealership as Director of Fixed Operations, Oja moved to Southern California to open a hot rod shop. There he met Boyd Coddington, then went on to meet legendary car designer Chip Foose and the rest is history.

In addition, Oja will judge two top awards for the Charlotte Motor Speedway Auto Fair – the 3M Automotive Aftermarket Division Award for Best Paint – one for the participating car clubs and one for the general public exhibiting cars. The awards will be presented on Friday, April 6.

Top attractions at the Charlotte Motor Speedway Auto Fair include:

The Charlotte Motor Speedway AutoFair features more than 50 car club displays and more than 10,000 vendor spaces offering an array of automotive parts and memorabilia. More than 1,500 collectible vehicles of all makes and models will be available for sale in the car corral that rings the 1.5-mile superspeedway. In addition, kids can enjoy face-painting, bounce houses and other games and entertainment in the Play Zone. Hours for the April 5-8 Pennzoil AutoFair presented by Advance Auto Parts are 8 a.m. to 6 p.m., Thursday through Saturday, and 8 a.m. to 4 p.m. Sunday. Single-day tickets are $11 each day for adults. Admission is FREE for children 13 and under with an adult. A four-day weekend pass is available for just $32. To buy tickets, AutoFair attendees can call the speedway ticket office at 1-800-455-FANS (3267), shop online at charlottemotorspeedway.com, or buy them at the gate.