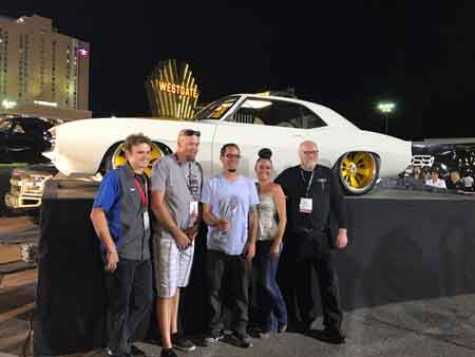 Cam Miller and team with "Under Pressure," the white 1969 Chevy Camaro that was the 2016 SEMA 'Battle of the Builders' winner.

Cam Miller of HS Customs in Logan, UT, is well known in the custom car world and has become a respected and reputable builder.

His "Under Pressure" white 1969 Chevy Camaro was the 2016 SEMA 'Battle of the Builders' winner.

Miller started out working for his father at the family convenience store and lube center for 10 years. He opened HS Customs in 1997 in a 1,500-square-foot space. The shop began doing custom work on off-roaders, motorcycles and snowmobiles.

In 2002, the shop reached a turning point when it grew to five employees---the same year Miller completed his first real build, a 1963 Buick Riveria. In 2014, another milestone happened when a custom build by HS Customs received a lot of press. The build was a 1958 Ford Thunderbird, owned by Alex Short.

HS Customs has won many awards in the custom car world and has been featured in several major publications, such as: Utah's Finest 2016, Top 5 Street Machine of the Year Goodguys 2016, Top 10 Reno Cup with 4th Place overall 2016, Custom Rod of the Year finalist 2014 Goodguys, 2nd in class Detroit Autorama 2016.

Autobody News reached out to Miller via telephone for more information.

"Crisp, clean and deep are what best describe why we love using Envirobase,” he said. “It sprays and lays out so good---It’s super user-friendly. Also the Vibrance VC5700 is the clear coat of choice at HS Customs. It has good build, super clarity and buffs really good. PPG is a wonderful company to work with. The support that PPG gives to the custom guys and gals is second to none. Everyone at PPG is like family to us."

With a full line of products for off-road, street, dirt, snow and your everyday drivers, the shop offers accessories for everyone:

Autobody News followed up for more information on recent and current custom projects by HS Customs:

Lange's ‘34 Ford: This is a ground-up rebuild with some custom touches.
This car started as a Street Beasts car and was built in the early ‘90s.
Redesigned with a more aggressive stance, more power, and better drivability via a 475hp 408 small block Ford, and Ford aod transmission.

Beazer ‘71 Camaro.: HS Customs added a taller cowl hood, as the motor builder built a 750 hp monster of a small block Chevy, and it has a real tall intake manifold. This car is near completion. HS Customs did final body work, flush mounted the glass, and reworked some of the engine bay. "This will be a monster street car for sure." said Miller.

HS Customs GMC Denali Duramax. This is a shop project to show some diversity. The underside of the truck is full paint and polish, custom suspension, exhaust and performance upgrades. The paint on the body showcases more of the custom graphic and airbrushing capabilities of the shop. Miller said, "We wanted to show people that we can build modern trucks that look good and function at the same time. We love to work on the whole gamut, from late 1800s to modern-day vehicles."