Ringbrothers to Appear at Autorama in Detroit, MI 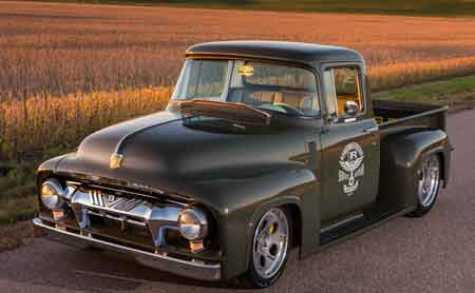 Jim and Mike Ring, co-founders of Ringbrothers, were born with fuel running through their veins and a passion for building innovative cars.

At the young ages of 10 and 11 years old, Jim and Mike were doing body work and painting cars anywhere they could, including in their parents’ basement and a friend's chicken coop.

The Ringbrothers’ shop, headquartered in the small town of Spring Green, WI, pulls double duty, serving as a collision and repair shop to the community in addition to delivering two to three custom-built cars a year.

In addition to collision repair and custom builds, Ringbrothers also produces an entire line of high-quality billet accessories as well as custom fiberglass and carbon fiber pieces. The billet accessories combine form and function to create a truly unique look that stands apart with craftsmanship and build quality that is second to none. The Ringbrothers line of billet products gives fans the opportunity to incorporate the Ringbrothers signature style into their own builds.

Ringbrothers has rocketed into the top ranks of American car builders over the past decade, winning numerous awards that include the coveted Design and Best of Show awards from Chevrolet and Ford, a handful of Goodguys Street Machine of the Year, multiple Mothers Shine Awards and countless magazine covers. Their cars have graced the stages of SEMA Battle of the Builders four times and been featured on episodes of Jay Leno’s Garage five times.

They said, “There are so many great products we can’t live without---everything from 3M sanding paper and their Festool dustless sanding system to our Global Finishing paint booth and infrared baking lights. However, our favorite auto body product is probably the 3M Accuspray system---It evenly sprays the BASF Glasurit paint we use on both our custom builds and the cars we repair for our collision business.”

View the embedded image gallery online at:
https://www.autobodynews.com/index.php/companies/item/14874-ringbrothers-to-appear-at-autorama-in-detroit-mi.html#sigProId3876cbd3aa
More in this category: « Original One Parts Welcomes Avery Hodge as Regional Account Manager '54 Truck by Legacy Innovations, Painted With BASF, Places as SEMA Finalist »
back to top