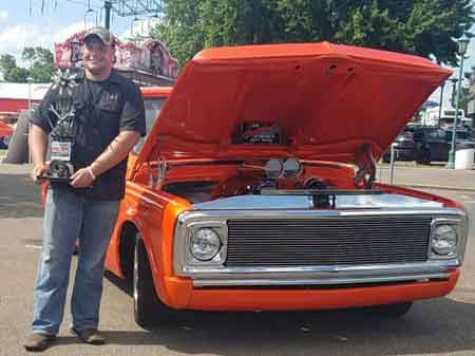 Austin Haynes was very excited to bring his 1970 Chevrolet C 10 step side truck to the 2017 SEMA Show as an entry.

"My overall experience of SEMA was absolutely amazing,” Haynes said. “It was a fast-paced roller coaster ride of incredible events".

Haynes got the truck when he was a sophomore in high school, and finished it after he graduated college. The build ended up being a six-year frame-off restoration. The truck gets its power from a 461 big block Chevy that is just a touch on the rowdy side. This truck is what he was taught with---everything from the engine to the body work.

"I made a lot of mistakes and learned a whole lot more,” he said. “The truck has been lowered by flipping the rear end and using drop spindles and lower coils on the front. The body has been smoothed and cleaned up by removing a few items and filling some seams. The bright orange paint choice for this build is Kirker’s Mandarin pearl."

Haynes grew up in the small town of Johnston City, IL, and continues to reside there today.

"I am really fortunate I got to live the small town 'Friday Night Lights' lifestyle," he said.

After high school, he continued his education by obtaining a criminal justice degree from John A. Logan College while working in construction. After college, he was hired at the Williamson County sheriff’s department, where he is currently employed.

"I really like Kirker paints,” he said. “They spray well and the finish is awesome. The truck that I took to SEMA and won the Young Guns division in the street machine nationals [with] was painted over four years ago and sprayed in a pole barn, not in a booth. The color is a big part of the truck. It’s the most-asked question I get at any show."