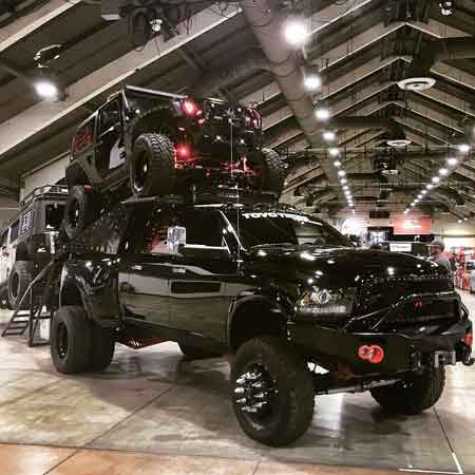 Truck Guru's at the SEMA Show.

Cris Payne's father was always wrenching on vehicles and fixing them for others while being the shop teacher at the local high school.

Now, at age 30, Cris still lives in the same small town of Taft, CA, where he was born. Bakersfield is the nearest recognized city.

What started as a passion for autos quickly became his main focus in life, aside from family. When he purchased his first new full-size truck, a Toyota Tundra, he decided to build it up. So he purchased parts here and there, found a company called RBP (Rolling Big Power) and decided to buy a grille and tip from them.

Cris started showing off RBP products via social media, YouTube and online forums, which then led to the company getting a few boosts in sales. One thing led to another, and then-founder of RBP Roland Trudell decided he had seen enough and called Cris. He introduced Cris to his brother-in-law, Rich Bravo. Bravo and Payne decided to partner with each other and start a company called TundraStop.com.

In late 2010, Cris bought yet another Tundra---a bigger, flashier model---and built it up. He took it to SEMA twice, each time with different looks. Cris' audience grew larger and larger until he decided to go bigger and purchase a diesel Dodge Ram. Not knowing what was ahead, Cris dove head-first in the new market and fell in love.

Cris built up the diesel Ram with his own unique flavor and taste, and was asked to use it for the movie “Fast 7,” the seventh installment of The Fast and the Furious film series, starring Paul Walker, Vin Diesel, and Michelle Rodriguez.

Cris also bought a Jeep, along with the Ram. He piggy-backed the Jeep on top of the Ram, and modified both of them to the hilt with the best of everything for SEMA. At the same time, he dabbled with helping others pursue their SEMA dreams.

After realizing the demand, he decided to do it full-time, and quit his job from oil field construction after working in that field for 11 years. The new business was named Truck Guru Design & Marketing. The company handles builds as well. In 2017, the company was fortunate enough to partner with 34 different builds being showcased at SEMA under its design, management and placement.

Since debuting a build in 2010 at SEMA, Truck Guru's has designed, marketed, built, managed and placed more than 100 top-quality builds at the SEMA Show. Partnering with today's leading publications and manufacturers across the nation has quickly secured Truck Guru's as one of the top automotive marketing agencies in the country. Truck Guru's prides itself as a company that goes above and beyond in every aspect of its business.

Autobody News reached out to Payne via phone for more information about Truck Guru's favorite automotive tools and products.

Payne said, "Rolling Big Power is great! It's so awesome to work with incredible companies and incredible partners!"