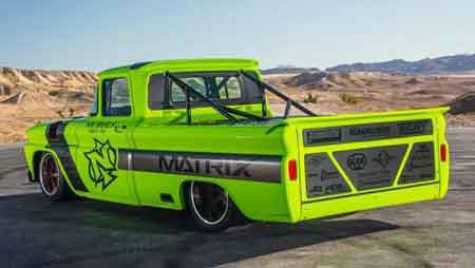 The green 1960 C10 truck that Justin Nichols built for the SEMA show in Las Vegas.

The first episode of the show will feature the green 1960 C10 truck that the shop built for the SEMA show in Las Vegas and was unveiled in the Matrix booth. The show will cover everyday life at the shop, following custom builds that are mostly ‘20s through ‘60s cars, trucks and motorcyles.

Autobody News reached out to Nichols by phone for more information.

"We are taking stuff outside the box and out of the norm,” he said. “We have our own style and try to prove that with any build---large or small. We were very leery about doing a TV show only because of the deadlines. Everyone knows you can't rush builds like this, but so far we are doing pretty good. We are going on three hours of sleep each night. Scheduling this many things at once with a small crew is next to impossible, but our team---Maegan, Ziggy, Nick, Donnie, Dave and myself---power through and turn out some crazy stuff."

The shop does custom paint and airbrush, as well as metal forming, fabricating and welding.

"The only thing we do not handle is upholstery, yet," Nichols said.

The shop's current projects will be premiered on the TV show.

Nichols was recognized along with Joe Vincent and Gary “Boogie Man” Zaborowski as one of the three Valspar Automotive Matrix System "Mavericks of Color" for 2018 at SEMA 2017. Matrix kicked off the Mavericks of Color campaign in 2017 with Ryan Evans from Count's Kustoms in Las Vegas, Cody Lumpkin from Dick Lumpkin's Autobody in Piqua, OH, and Shane Marchyshyn,  Automotive Services Inc., in Columbus, OH.

Autobody News followed up with Nichols for more information on the TV show and his role as a Matrix System "Maverick of Color."

"I have been using Matrix paint for years,” Nichols said. “The ease of being able to do whatever you want and the clears are amazing. Most importantly, they are like a family. I am so happy to be a part of the Matrix family. For the company to pick me as a Maverick of Color was kind of mind-blowing when you think of how many painters are in the USA.”

Born and raised in Watseka, IL, Nichols took after his father, who was also connected to the life of flashy and fast cars. He has appeared on Spike TV's "Search and Restore" and the “PowerNation” show.

Nichols and his staff won Best Traditional Hot Rod and Best in Class with their 1929 Ford Sedan at World of Wheels in Chicago. The International they built won top 20 In Chicago World of Wheels, along with the Best Truck Interior award. His team also received the Street Rodder Top 100 award.