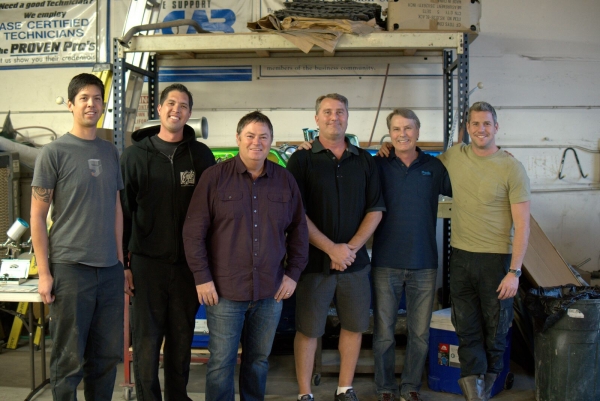 The nearly 100 people who attended had the opportunity to see Evans “test drive” the NitroHeat system. Evans works at Count’s Kustoms, a hot rod and chopper customization/restoration shop in Las Vegas, NV.

“Count’s Kustoms has used NitroHeat for the past two years,” said Bernie Fischer, factory representative for NitroHeat. “Evans tells us that he uses the equipment in the shop on a daily basis and loves it.”

While Evans demonstrated the NitroHeat equipment in the spray booth, Fischer shared the main benefits of NitroHeat, which uses heated compressed nitrogen instead of compressed air as a propellant.

“NitroHeat reduces cycle time in the spray booth by about 20—25 percent, which increases production in the shop,” said Fischer.

Since nitrogen doesn’t carry any moisture, Fischer said the flash time is cut in half in between coats.

“If you are a busy shop and you have a lot of throughput, you can paint even more if you are faster at what you do,” he said. “At the end of the day, you will be able to push one more car through in the same eight hours.”

In addition, Fischer said an average customer can save 20 percent on all paint materials using NitroHeat, and the finished product is cleaner, nicer and more evenly distributed.

Pat Shrewsbury, owner of Prestige Quality Collision Repair, first learned about NitroHeat while watching “Counting Cars” on television. He had an opportunity to see how the equipment operates during the SEMA show held this past November in Las Vegas, and purchased it about a month ago.

“The first thing we noticed is the reduction in flash times---the ability to paint the jobs faster because there is less waiting in between coats,” said Shrewsbury, who has operated his business for 35 years. “The drying times of the products are a lot quicker in general and the paint lays out nicer because of the steadier stream of nitrogen, which makes for a smoother flow, versus standard compressed air.”

NitroHeat was established in 2010 by Derek Naidoo. With more than 30 years of experience in the automotive engineering industry, Naidoo set out to look for a more efficient propellant for spray painting, which ultimately led to the development of the NitroHeat system.

“The Nitromax 15 cfm is for a smaller shop with one spray booth and one painter painting,” said Fischer. “The Nitromax 30 cfm is a larger machine and allows two painters to work simultaneously.”

Fischer said both machines offer the same results when it comes to cycle time reduction, paint savings and increased quality with the finished product.

For bigger shops, an auxiliary tank can be used next to the generator so three or four painters can work at the same time, and NitroHeat can customize larger machines for different applications.