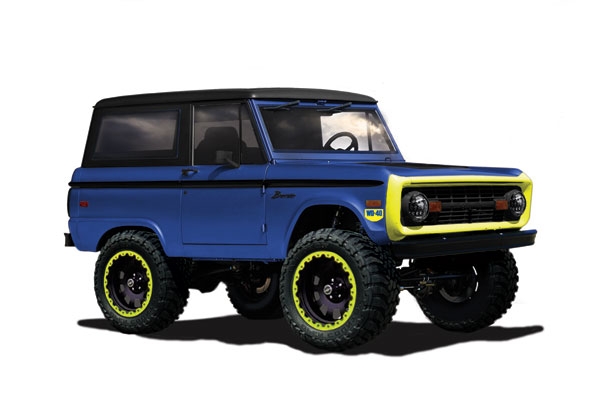 As part of a lengthy proposal, Aaron Vaccar submitted this rendering.

Every year when SEMA hits Vegas, show attendees start looking around for the WD-40® booth because they know that it will contain an over-the-top, one-of-a-kind vehicle that will fascinate car lovers worldwide.

This year, WD-40 unveiled the WD-40/SEMA Cares Boosted Bronco at the 2017 SEMA Show as part of its annual restoration build, which blends old with new and highlights the many automotive uses for WD-40 Multi-Use Product and the WD-40 Specialist line.

“This original 1966 Ford Bronco is an iconic cult classic vehicle, and we’ve created a modern, unique version with the WD-40/SEMA Cares Boosted Bronco,” builder Aaron Vaccar said. “WD-40 Brand is an industry icon, with a long history of supporting automotive professionals with products that help us get the job done right, and were an integral part of getting the Bronco ready for the SEMA Show.”

The WD-40/SEMA Cares Boosted Bronco retains its original four-wheel drive, but gets a modern spin with its hand-built 20” Detroit Steel Wheels, Diode Dynamics Bi-LED round headlights and Distinctive Industries touring seats and upholstery. From its WD-40-themed matte-metallic paint, to its twin-turbo V6 EcoBoost powered drive train, everything about the vehicle stands out, according to a press release from the company.

The WD-40 booth was once again built to look like a mechanics garage, located just outside the Las Vegas Convention Center's South Hall where WD-40 Specialist products were demonstrated, visitors played games for WD-swag and visitors shared how they use WD-40 products on social media to earn branded hats, T-shirts and more.

Designing and building award-winning custom cars has been a passion of the Vaccar family since the mid-1970s, eventually leading to the establishment of ACV Motorsports in 1999. Aaron and his father, Carl Vaccar, work side-by-side on every project because they bring different skills to each car they create, Aaron Vaccar said.

"We took a different approach with this vehicle, because we wanted it to be fresh and unprecedented,” Aaron Vaccar said. “We had to submit a 10-page proposal and then wait for the response. When they contacted us and gave us the news, we were obviously thrilled. We worked 30 days non-stop to get it done, but we're delighted with the result."

The tight deadline didn't dissuade Carl Vaccar as the clock kept ticking, because he believes in his son and his abilities, he said.

"My floor is Aaron's ceiling and I'm so happy to see his success, because he deserves it. The fact that this vehicle will raise money for a great cause like SEMA Cares makes it even more special,” he said.

It has been a fast track to success for the Vaccar family, but it started early for Aaron. By the time he graduated from high school in 2005, he had already started branding his own custom car “signature series” for sponsors and had an online aftermarket parts store, ACV Mailorder. As he entered Youngstown State University for a Business Administration degree, he learned more about being a real entrepreneur and tested out new ventures wherever he saw opportunities. Before Aaron was even able to graduate, the school had invited him to speak to other core classes and at events such as the Extreme Entrepreneurship Tour to motivate fellow business students.

Aaron's second major SEMA Show project vehicle came in 2011 from Ford Motor Co., along with a Design Award from Ford for his outstanding achievement. In the same year, Aaron also unveiled his first venture into a new industry---Blood & Grease "kustom klothing" was introduced into the market as an edgy-retro, hot rod-influenced premium apparel and accessory line, which quickly achieved cross-country and international sales.

As recently as 2012, Aaron had the honor of being one of the largest builders at the SEMA Show, with a total of three vehicles awarded to him by Ford Motor Company and General Motors to design. In addition, he debuted the re-branding of his car designer identity under the name "Vaccar".