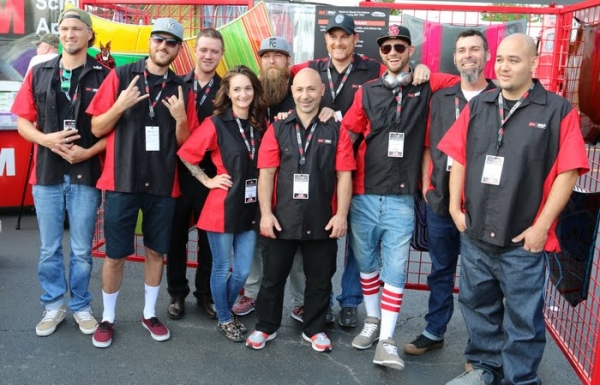 Reunion of 10 of the World's Best Car Painters at SEMA.

Every year, the 3M Automotive Aftermarket Division makes a major impression at the SEMA Show. This year, it pushed the envelope even more with a busy schedule packed with activities and celebrity appearances.

3M featured big names such as Richard Petty, Chip Foose, Charley Hutton, the Ringbrothers, KC Mathieu, Kyle Morley, Ryan “Ryno” Templeton and Mark Oja to headline the 3M Automotive Aftermarket Outdoor Showcase, while other events, such as a live wrap competition, took place at its booth on the convention floor.

Also taking place at the 3M D.E.M.O. trailer parked outside the front lot of the Las Vegas Convention Center was the 3M and the Collision Repair Education Foundation auction of custom-painted hoods designed by leading painters from around the world. The auction benefited the 3M Hire our Heroes program.

The hoods were created during the 2017 3M PPS World Cup, held in conjunction with the Woodward Dream Cruise in Detroit last summer. 3M invited leading automotive painters from around the world to come to Detroit to demonstrate their painting skills with the latest 3M solutions for vehicle painting, including the 3M™ PPS™ Series 2.0 Spray Cup System.

Canadian Painter Carl-André Giroux was thrilled to be involved in the 3M PPS World Cup in Detroit this summer, and the reunion at SEMA made it even sweeter, he said.

"These are some of the greatest painters in the world, so it's an honor to be associated with these amazing artists," he said. "The hoods we created will be raising money for a much-needed charity, and that is a big deal for all of us."

3M hosted a live wrap competition that attracted crowds to their booth throughout the show. Twelve teams consisting of two to four participants went head-to-head using their design skills with a combination of 3M Wrap Film Series 1080 and the 3M Design Line Knifeless Tape.

“With so much talent under one roof at SEMA 2017, we wanted to create an atmosphere where creative energy from both contest participants and attendees will produce very exciting designs,” said Janelle Pizzi, product marketer for 3M Commercial Solutions Division. “The 3M 1080 Live Wrap Competition is a great opportunity for installers to show off their unique talents while using Wrap Film Series 1080 and Knifeless Design Line Tape.”

Team contestants had a chance to win some of the $32,000 in prize money and merchandise, including Wrap Film Series 1080. Additionally, the winning team gained major bragging rights by having a photo of its design incorporated into the Knifeless Design Line Tape packaging. Congratulations to this year's winning team, consisting of Steve Carney, Joe Alexander, Rio Torres and Carl Brewer.