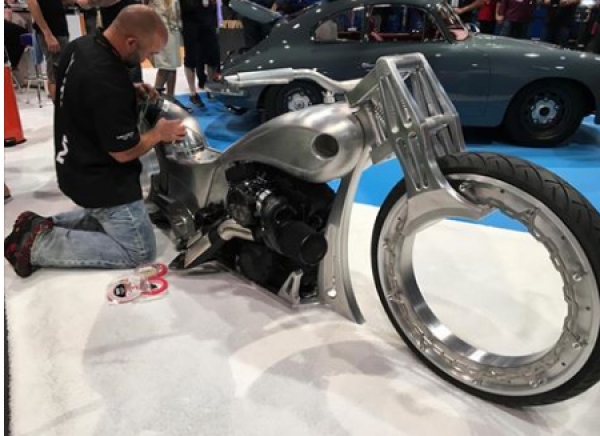 One of the new Matrix Mavericks of Color, Joe Vincent, prepping his bike for pinstriping at Valspar Automotive's SEMA 2017 booth.

The three were introduced in the Valspar Automotive booth on Tuesday, October 31.

Justin Nichols, Nichols Paint & Fabrication, built his first hot rod at the age of seven with his dad—a Maverick in the making at an early age. It was a 1931 Ford pickup topped with what Justin describes as “grasshopper” green. It’s one of those builds that stays in the family; Justin’s son will someday be behind the wheel of that father son build. Justin’s dad only recently passed away; however, he remains a driving force—an inspiration—in his son’s life and business as the work of Nichols Paint & Fabrication, a now big-time custom shop in the small town of Watseka, IL. Justin debuted at the SEMA Show 2017 with not one, but two feature builds and stepped into the role of “Maverick of Color”.

Gary “Boogie Man” Zaborowski, Boogie Man’s Custom Creations, takes Matrix back to its roots—Detroit, where the brand was founded and introduced to refinishers more than 30 years ago. Today, in the Motor City, Boogie Man brings old cars back to life for close friends and now referrals since retiring from General Motors. From a 1940s Willy to a 1940 Ford Coupe, Boogie Man is the man in this city for custom cars—although the name isn’t related to his craft at all, but to his moves on the dance floor. Nowa Maverick, Gary is recognized for his unique skill and unprecedented passion for what he does best and that is candies.

Joe Vincent, Vincent Dezigns, is a true American hero—aU.S. Army veteran with 15 years of service—and now, a celebrated Maverick of Color. A well-known figure in custom with a following that equals that of Matrix, he’s been painting cars, bikes and everything in between for nearly 20 years and creating some of the industry’s most unique and recognized work. You can see his masterpieces on Facebook and Instagram @vincentdezigns.

SEMA 2016 saw the introduction of Matrix’s Mavericks of Color, a unique campaign recognizing automotive finish industry leaders for their passionate and creative approach to the craft. The 2018 Mavericks were selected based on their reputation in the industry as bold, creative and cutting edge, eager to take on any challenge and raise the bar for industry artists—future Mavericks.

“Justin, Gary and Joe are exactly the kind of painters we love to celebrate as Matrix users,” said Pete Willman, Senior Sales Director—North America, Valspar Automotive. “These guys show a relentless dedication and commitment to what they do and to what we do as we continue to innovate in product design to give them what they need to keep on creating. To them, it’s not just about becoming a renowned painter, it’s about continually developing their skills and surpassing their work on the next build.”

The “Mavericks of Color” campaign began in 2016. “We were looking for true brand ambassadors,” says Willman, “devout users that knew the product line inside and out, while trusting and valuing its position when it came to quality, performance and color match.”

Valspar Automotive turned out the Matrix campaign for the first time with none other than Ryan Evans from Danny “the Count” Koker’s Count’s Kustoms garage in Las Vegas. Ryan is not only the main talent behind legendary paint jobs on one of television’s most popular automotive shows, he’s an artist.

To stand with Ryan as a Maverick, Matrix chose a shop owner and a manager: Cody Lumpkin from Dick Lumpkin’s Auto Body in Piqua, Ohio and Automotive Services Inc.’s Shane Marchyshyn (Columbus, OH).

“While Cody and Shane aren’t necessarily pin striping low-riders in Las Vegas, they are driving their business to the next level with Matrix to deliver in continued quality, performance and value every day in the shop,” says Willman.

For more information about Matrix and the Mavericks of Color campaign, visit matrixsystem.com.