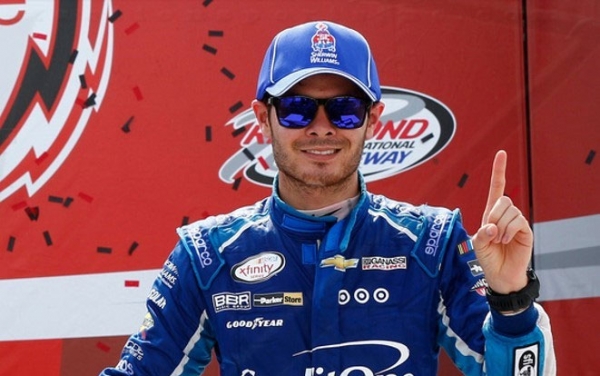 Kyle Larson: driver of the No. 42 Chip Ganassi Racing Chevrolet.

Sherwin-Williams, the Official Automotive Finish of NASCAR, is proud to present Kyle Larson: driver of the No. 42 Chip Ganassi Racing Chevrolet.

So far in 2017, Larson has earned a career-high four wins in MENCS (at California, Richmond and both Michigan races) and three pole positions — and he was awarded another two by virtue of rained out qualifying sessions. With four races still remaining in the 2017 season, he has already set a career best in wins (four), top-fives (14) and top-10s (19).

In 2016, he won the first MENCS race at Michigan International Speedway. He received career best finish of ninth in the standings.

Larson had his first full season in the Monster Energy NASCAR Cup Series (MENCS) in 2014. He also earned 2014 Sunoco Rookie of the Year on eight Top 5 finishes, 17 Top 10.

In 2013, Larson made his series debut in the NASCAR XFINITY Series (NXS) completing his rookie season with 17 top-10 and nine top-five finishes. He finished the season eighth in the series point standings while also capturing the NXS Rookie of the Year honors. In addition, he won the NASCAR Camping World Truck Series (NCWTS) race in Rockingham and made his NSCS debut in the Fall Charlotte race.

Larson became a two-time SPEED Performer of the Year nominee in 2012, made his first stock car start in the Pete Orr Memorial 100 at New Smyrna Speedway (Fla.), winning in his first race behind the wheel of a car with fenders. Larson ran his first full season in the NASCAR K&N Pro Series East, capturing two wins, one pole, seven top-five and 12 top-10 finishes en route to the series championship and Rookie of the Year honors.

In 2011, Larson broke into the national spotlight during his first year of racing on the national open-wheel circuit, where he amassed 22 feature wins in the World of Outlaws, American Sprint Car Series and all three USAC National Divisions. Highlights included sweeping the Belleville Midget Nationals and a sweep of the prestigious 4-Crown Nationals: winning in Silver Crown, Sprint Cars and Midgets at Eldora Speedway.

Read 1718 times
More in this category: « GFS Partners with RollSeal to Offer Durable and Affordable Fabric Roll-Up Doors Reports of AkzoNobel Approaching Axalta about Possible Merger »
back to top