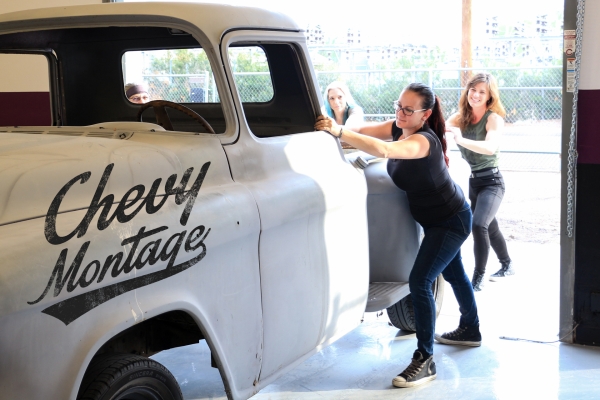 Bogi Lateiner (forefront) and some of the Chevy Montage Team.

Bogi Lateiner is a force to be reckoned with. In addition to being a shop owner and A.S.E. Master Technician, she is also a business consultant for other shop owners, TV host for “All Girls Garage,” a speaker and an educator.

Her love affair with cars began at age 16, when she did a complete restoration of her VW Bug with the help of her high school auto shop teacher. After high school, she attended Oberlin College, where she studied Pre-Law and Women's Studies.

However, she couldn’t shake her love for working on cars. After graduation, she shifted gears back to her original passion and enrolled in Universal Technical Institute. She worked for BMW Dealerships for six years. After that, she took a big step and opened her own shop, 180 Degree Automotive, located in Phoenix, AZ.

One of her goals is to improve the reputation of the automotive industry and help attract more people to the trades. This led her to her work as a business consultant and management trainer for WORLDPAC Training institute, and to her role as a host on the TV show "All Girls Garage" on the Velocity Network.

This year, Bogi launched “Bogi’s Garage,” her next venture aimed at improving the automotive industry, empowering women and supporting the next generation of automotive professionals---both male and female.

“Less than 2 percent of technicians are women,” explains Bogi. “I believe women have a lot to bring to the automotive profession, and through fostering a more balanced work force, we’ll see many improvements to the industry.”

Bogi’s Garage is currently working on a new build. The idea behind Bogi creating the build, dubbed the “Chevy Montage” and set to be unveiled at SEMA 2017 in BASF’s booth, was to offer a project that would gather and celebrate women working within the industry---past, present and future. In executing the build, Bogi’s Garage has opened its doors to 90 women of varying skill levels, ages and backgrounds to be hands-on in the build of this 1957 Chevy Pickup.

“Montage” refers not only to the mash-up of a late-model, domestic truck being powered by a modern, euro BMW S62 engine, but also to the wide array of women coming together to build it. The build has taken place throughout 2017, headquartered at Bogi’s Garage in Phoenix, AZ. The S62 engine was an easy choice for Bogi, as she cut her teeth in the industry serving as a BMW dealership technician for six years before opening her own shop. The powerful V8 engine also makes an unexpected twist when looking underneath the hood of the Chevy Montage.

Beginning with a bare bones pick-up body in January, Bogi and the revolving crew of women from across the U.S. started the year with full body work---including taking the scarred shell down to bare metal and beginning the frame-off restoration from there. Aside from restoring the truck to its former glory, you’ll also find a few custom body modifications, such as a modified grill that gives a nod to the Chevy’s BMW engine.

Another custom feature of the Chevy Montage is its BASF paint. Bogi, alongside Madison Smith, visited BASF’s Training Center to create three unique BASF paint colors. Bogi’s fans voted for which color they wanted to see on the finished project via social media. The chosen color won’t be publicized until the truck’s reveal at SEMA.

Bogi is grateful for the incredible industry support she has gotten for the Chevy Montage project, all of the sponsorships that made the build possible and all of the women who volunteered their time to be a part of history, and who have formed a strong community of female automotive professionals who share a passion for cars and the skilled trades.

The truck’s upcoming reveal is Tuesday, October 31st, in the BASF booth at 11:00AM. Follow along for more of the project with behind the scenes videos at www.bogisgarage.com, @bogisgarage social channels and #chevymontage.