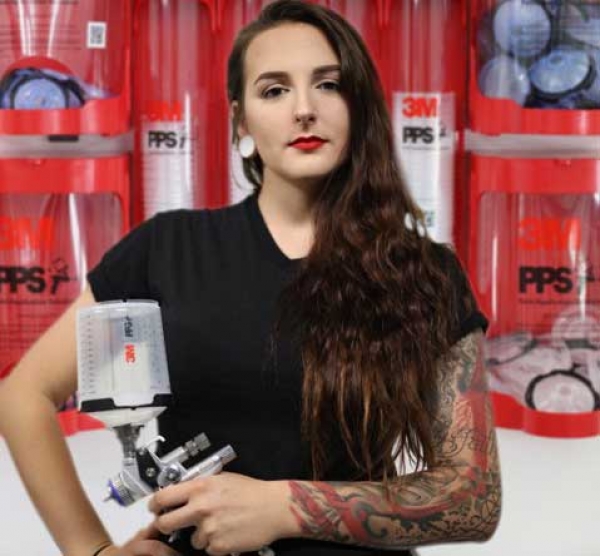 Growing up, Madison Smith was always around cars. Her grandfather and father restored a ‘69 Chevy C10 and a ‘55 Chevrolet Bel Air, to name a few.

As a child, she was at the dirt track every weekend helping her dad scrape mud off the tires of his racecar.

While going to Milan High School in Milan, TN, Madison knew she wanted to pursue a career in the auto industry, and had plans to be a mechanic like her dad and grandfather. She took a high school body shop class, where she found herself fixing a body line on an old car for the first time. Her teacher, Mr. Andy Tatum, taught her about painting vehicles.

Madison knew that this is what she wanted to do for the rest of her life.

She had always been artistic and loved to draw and paint on canvases. But when she realized she could paint on cars, she saw the perfect combination of her two favorite things: cars and art.

From there, she went on to compete in the SkillsUSA Tennessee Automotive Refinish Technology competition. During the second year, she placed second, and during the third year, she won the competition. SkillsUSA came to Madison's high school to present the award to her. She was the first female to win for the state of Tennessee.

During the competition, she met Kristen Felder from Collision Hub, and went on to work for her after college.

Madison had worked at Keith Beard Auto Body Works before she graduated high school. He was the first to take a chance on her, for which she said she is grateful, because a lot of shops in the area would not hire a female.

She then went on to college at Lincoln Technical College (formerly known as Nashville Auto-Diesel College) for the collision repair program. It was a 13-month program that included custom paints, which is why she made the decision to go there.

After college, she moved to Benton, AR, and worked for Collision Hub.

"It was an amazing experience getting to travel and meet my idols in the industry," she said.

She left there and then worked in a body shop, painting for two years. It was a huge shop with five other painters.

Madison then went back to work for Collision Hub. Next, she met Girls Behind the Gun organizer Konstandina (Connie) Manjavinos. Then she went to work on Bogi's Chevy Montage, The All-Female build by Bogi's Garage for SEMA 2017. In addition to working alongside other influential women in the industry, the conversations they all had about their experiences are something Madison will never forget.

All of the sponsors of the work for the build have been supportive of Bogi's Garage, and supportive of women in the industry. BASF is one of Madison's favorites, from the people working there to the products.

When contacted by Autobody News, Madison said, “BASF has an incredible team helping me out. When it was time to spray, all they had to tell me was ‘Okay, here is the mix ratio… here is how you apply it... here you go!’ It's such an easy-to-use system. For the first time spraying a lot of BASF, I really enjoyed everything about it --- the sealers, the Onyx HD waterborne base, and the clear. The clear was my favorite, hands down. It went on so effortlessly with the SATA 5000 RP. "

3M Collision was also a huge part of the build. Madison got her hands on the new PPS 2.0 cups and used them throughout the build. She was one of the first to experience the difference.

"I was able to pour more clear into the cup without disconnecting it from the gun. The little changes like that make so much of a difference,” she said.

Recently, Madison decided to move back home to Tennessee to be closer to her family. She bought two ‘59 Cadillac Coupe Devilles to fix up, and landed a job at Legens Hot Rod Shop in Martin, TN.

When people ask her where she sees herself in five years, she says, "This is where I am and what I want to be."

Learning about the history of all these old cars is something she has always loved. At the age of 23, she says "I have never been happier and more blessed in my life than I am today."