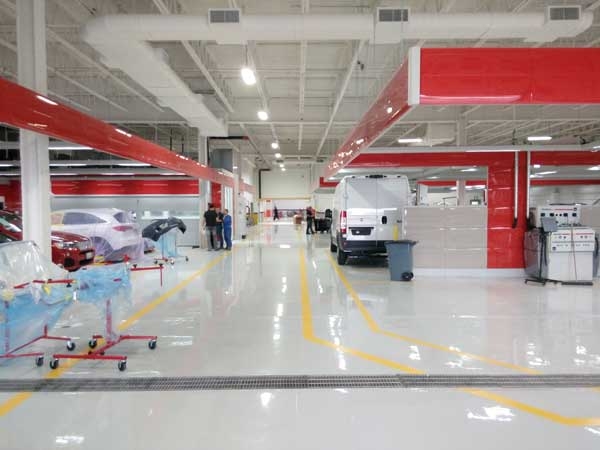 The collision repair shop specializes in repairing Ferrari, Maserati, BMW, Ford and other luxury brands, and moved to a larger facility in Vaughan the first quarter of 2017.

Manuel De Luca, the manager of European Autobody, said the Symach process and equipment have greatly helped improve operations at their facility. “Every collision center, big or small, should consider these products, do their research and see that Symach is a feasible way to be successful,” he said.

European Autobody is part of the Remo Ferri Automotive group, which includes 13 locations in Ontario. After learning about Symach from a colleague, De Luca spent time researching the FixLine system and watched several YouTube videos about the Italian-based company.

“I was intrigued almost immediately and knew right way this is the future, and we had to be part of this,” he said. “We strive to be ahead of the curve, which changes just as fast as it comes, in order to provide our customers and partners the best repair procedures and services available.”

In addition to purchasing Symach’s body shop equipment, De Luca was interested in the Italian company’s FixLine process to run day-to-day operations in his shop. “We felt it would allow our facility to be successful and to take the next steps in building our business,” he said.

By encompassing all aspects of the repair, De Luca said the FixLine process has allowed operations to be more efficient, ensured a quicker repair time for customers, and has decreased rental costs to insurance partners. He also said the system is helping to minimize delays of vehicles in the prep and paint department. “We have been able to reduce a typical two-day minimum down to one day,” said De Luca.

Before installing the new equipment, the shop repaired approximately 45 vehicles a week. With the use of Symach’s FixLine system, which includes “SAP” Symach Application Process, Drytronic technology, and seven robots, the production capacity has already increased to 90 repairs per week with the same number of technicians and no overtime. It has the potential of completing more than 120 repairs per week. “The robots drastically reduce drying times of all substances,” said Osvaldo Bergaglio, CEO of Symach. “Our international team trained the staff at European Autobody to help achieve the maximum output of vehicles and ensure they are successful in their new location.”

“Osvaldo has been amazing throughout the entire process; we had many revisions, and every time he professionally handled us with patience and gratitude,” said De Luca. “I am amazed how efficient he and his team have been.”

He said the Symach process and equipment have helped his shop continue to grow and be successful. “It’s the latest technology on the North American market,” he said. “You only have one chance to do an excellent job. Make sure you capitalize on those chances!”