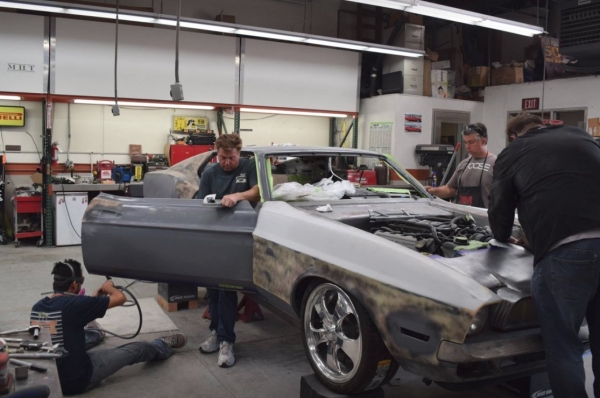 Chip Foose and his team are well known in the automotive world. He has completed numerous custom auto builds and restorations, and has won many industry awards.

He was the star of "Overhaulin," a car-restoration reality TV show on the Velocity Network, and makes appearances at automotive events worldwide.

Time is running out for Foose and his team. As of today, they have only 41 days left to complete a car build project out of their Huntington Beach, CA, shop for SEMA. They are putting a 1971 Ford Mach 1 Mustang body onto a modern 2010 Mustang GT, extending the wheelbase by 3 inches. The front end will be completely restructured with new strut towers and a cleaned-up engine bay.

Chip Foose's social media accounts posted the following information about the "Mach Foose". The ’71 Mustang’s stock rear quarters will be replaced with quarters from a 1970 Mustang. These new panels will add new shape and width to fit the wider rear wheels and tires. The car will use Baer Brakes and EradiSpeed rotors.

Eddie Kotto of Kotto Auto Glass helped Team Foose with the rear window of the car. Eddie's team custom-cut a piece of glass from a Ram 2500 van to make the flushmount rear glass that the Mach Foose needed.

Team Foose is known for its exclusive use of BASF paint. On a social media post, Chip Foose said, "We exclusively use BASF Refinish Glasurit products."

The completed project car will debut Tuesday, Oct. 31 in the BASF Refinish North America booth at The SEMA Show in Las Vegas, NV.

"The Foose team uses our premium waterborne, Glasurit 90 Line, for all of its builds. Foose mixed a custom warm Silver, known as 'Mach Silver' and topped it with Glasurit 923-210 Low VOC Ultimate Clear to give the Mach One a glamourous, fresh-off-the-line look.”

On Sept. 29, via his Facebook page, Chip Foose thanked the sponsors of Mach Foose, and announced the day of the car's reveal at SEMA:

Thank you to all our sponsors for helping us make automotive dreams become reality: