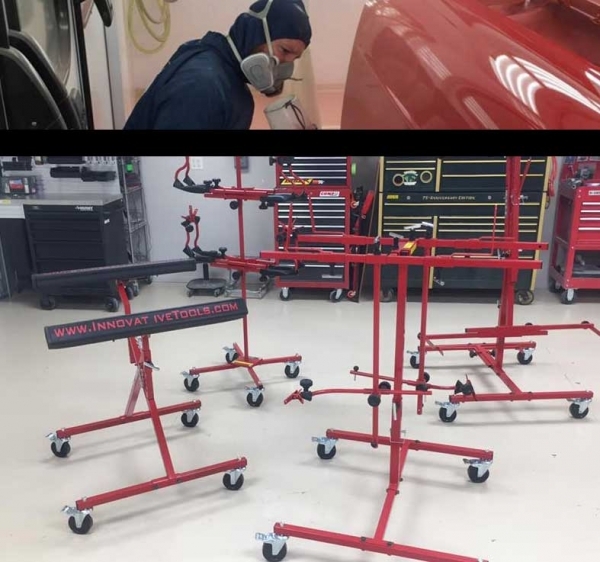 Charley Hutton began his custom car career at an early age, and is now widely recognized as a leading automotive fabricator and painter.

Charley began his career working with the legendary Boyd Coddington, who had him work on the famous 1938 Lincoln “Led Zephyr.” He appeared on the Discovery Channel's "American Hot Rod" as Boyd's body shop supervisor. In 2004, Hutton joined another legendary team, Foose Design, led by automotive icon Chip Foose.

When working with Foose design, Charley worked on his first Ridler car, the 1936 Ford “Impression.” He also worked with Rad Rides by Troy, joining Troy and his team to work on the 1936 Ford “First Love.” In 2009, Charley, along with his wife, Teri, opened Charley Hutton’s Color Studio in Nampa, ID. Charley has appeared on the automotive TV shows "Overhaulin’" and "Chasing Classic Cars." He now makes personal appearances around the United States and around the world at automotive events.

One of Charley's favorite tool companies is Innovative Tools & Technologies in Minnesota. Recently, Charley demonstrated via social media  the assembly of a set of four Innovative tool racks for use in his studio. The stands he refers to are the X-stand, used primarily for reassembly and body work, and the Octopus with eight moveable arms, which is a utility stand used mostly for painting. Also included are the Door Fender Stand, which holds a door and fender at the same time, and the Ultra Rack, which holds hoods, doors, fenders and more.

Innovative Tools & Technologies was founded in 1996 by Bryan Johnson. As an auto body technician for more than 21 years, he noticed the need for quality racks to hold plastic bumper covers. During his career, many shops placed the bumpers over trash barrels for painting. Bryan came up with a better way to support and secure bumpers during the repair and paint process by creating the SuperStand. This was the first of many innovative products, hence the name of the company.

Currently, more than 275,000 Innovative products are in use throughout the U.S. and worldwide. Innovative’s customers range from small shops to large corporations to do-it-yourself individuals.

Read 2397 times
More in this category: « Remy Donates to AACF to Help Industry Members Rebuild from Major Hurricanes All New SEM Website Delivers Best in Class Experience, Just Like Its Products »
back to top