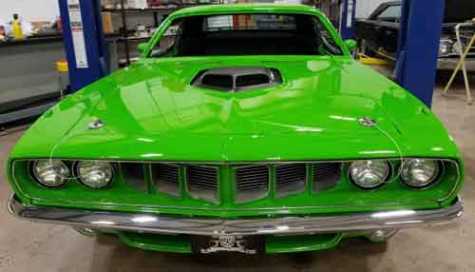 Mark Worman, the producer and director of the reality car restoration TV show “Graveyard Carz” on the Velocity network, reported the following through the “Graveyard Carz” Facebook account on August 24:

"We believe the SEMA 'Cuda VIN BH23G1B181333 OR License SEMA16, has been moved from the dirt floor-pole barn, pictured earlier this week, and has likely been sold. Our investigators have discovered that the car was purchased by someone in Colorado."

The 1971 Barracuda made its debut in the Mopar booth at SEMA 2016. The builders were Dave Rea and Mark Worman, known as cast members of “Graveyard Carz.” It was a very popular attraction at SEMA.

OER Restoration Parts was the source of more than 350 of the parts. The bright green ‘Cuda has a modern 392 Hemi with a six-speed Tremec transmission, supplied by Silver Sport Transmissions. Built by “Graveyard Carz” and Magnum Force Race Car Fabrication, it also has a six-speed Magnum transmission.

Additionally, the post stated: "Anyone who knows this person or of the car's location, please email our investigation task force at recoverysystem.or@gmail.com. For those of you who suggest this is a publicity stunt, you're dead wrong. This is real. Our car was taken and we want it back."

Fans of the show showed support through their comments on the Facebook post, such as “I believe there's a better than average chance of recovery--since this car has had a lot of publicity and fame,” “Hope you guys find your car! Shared in Ohio,” and “Hope you get it back intact. A ton of hard work went into that car and it came out awesome!”

The Facebook post also said: "We have a court order to support that this is real. We just want our car back. This will not be discussed in the show, we're not capitalizing on our loss in any way."

Autobody News will follow up with breaking news updates on this story. Stay tuned.