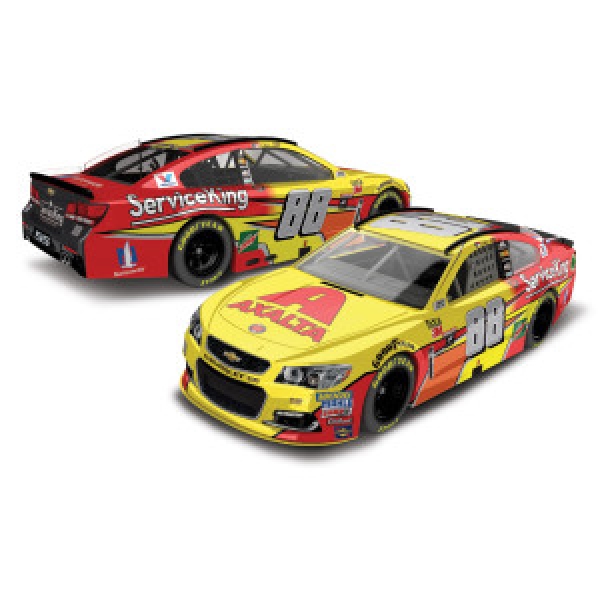 Currently in his 18th year of the NASCAR® Cup Series™ competition and set to retire after this year's racing season, Dale Earnhardt Jr. is one of NASCAR's most well-known drivers. Axalta Coating Systems and Service King are two of the lead sponsors of Earnhardt Jr.'s No. 88 Chevrolet SS.

In addition to his outstanding record on track, Earnhardt earned the NMPA Sprint Most Popular Driver award for 14 years running.

At Auto Club Speedway on March 26, 2017, Earnhardt celebrated yet another career milestone when he climbed behind the wheel of a specially designed race car in honor of his 600th NASCAR® Cup Series™ start. The No. 88 Axalta® Service King Chevrolet SS was brightly painted, featuring a commemorative 600th start logo on the hood and above the b-post.

This all-new paint scheme looked great on track and in die-cast form. Each 1:24-scale replicates Earnhardt’s Chevrolet SS with precise detail and is also available in 1:64-scale.

Axalta Coating Systems is a coatings company headquartered in Philadelphia, PA, that develops and manufactures coatings for light and commercial vehicles, industrial, and refinish applications.
For more information visit: axaltacs.com

As one of the fastest-growing providers of high-quality collision repair services, Service King currently operates locations in 23 states across the U.S. The organization celebrated its 40th anniversary in 2016, with a history that dates back to Service King’s founding by Eddie Lennox in Dallas, TX.
For more information, visit ServiceKing.com.

Other versions of the Earnhardt Jr. #88 car are also available on the Hendrick motor sports website.