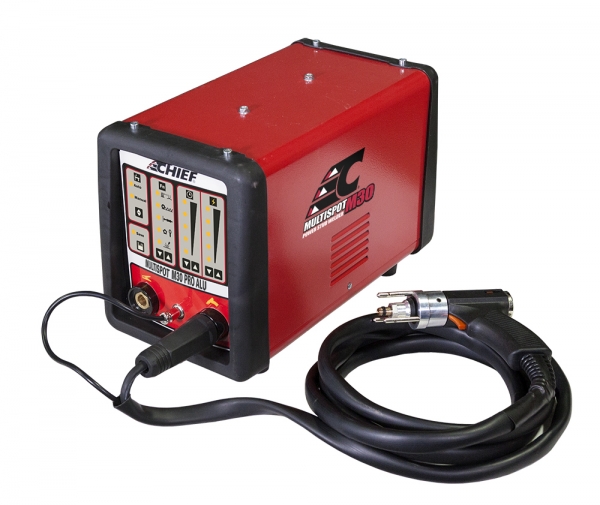 Grounding preparation is automatic, eliminating the need for grounding cables, and through-material transfer of welding heat is minimized or eliminated.

For collision damage repair, when a stud is spot welded to the outside surface, all too often some of the heat is transferred through to the backside of the material, causing unintended additional damage. The new Chief M30 Pro Alu Stud Welder incorporates technology that allows for a strong spot weld with minimal heat penetration, so little or no heat is transferred through the material to areas where it is not needed.

Another productivity enhancement of the Chief M30 Pro Alu Stud Welder is a grounding mechanism built into the stud gun head. This eliminates the need to sand off a piece of the panel material so that a ground can be attached to this bare metal area. Instead, when the M30 Pro Alu Stud Welder head is applied to the surface of the material where the stud is to be welded, grounding prongs automatically emerge and touch the surface, providing the necessary grounding to perform the stud welding.

The M30 Pro Alu Stud Welder operates off of 115V power. It is available as part of the new Chief MultiTool Aluminum Dent Repair Station or separately.