Getting involved: How to Help the Collision Repair Industry

When I first began writing articles I was a body shop owner blowing off some steam. I sent it off hoping someone else out there felt the same way. As things turned out I was not alone, I’m now a columnist for Autobody News, and in a position of “Industry advocate.” [Photo: Lee and Sheri Amaradio outside the California State Capitol] Shops were crying out for someone to speak out loud about the things that were only being said behind closed doors. We were afraid of the insurers retaliating on us. We never assumed that we might gain their respect; which we have. Being in the limelight has its pitfalls but also has its rewards. At least I am able to speak the truth when few want to hear it.

E-mails arrive all the time from shop owners asking my advice on certain issues. However, this is a double-edged sword. On one hand, I’m getting a great education because I’m forced to read and understand the laws as they pertain to the collision industry so I can give correct advice. But on the other side is the fact that little has changed and while I have put a bulls-eye on my back, only a small number of shop owners are willing to step up.
It would be great if I had the magic bullet that would change circumstances for shop owners, but, unfortunately, I can’t change anything by myself. Change has to start with each shop owner, with everyone doing their part. Until this happens we will always be just the same fragmented industry we have always been. [Photo: Lee with CRA members post vote] 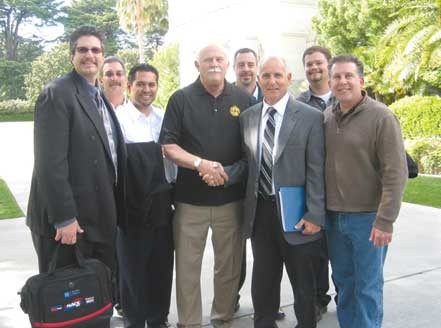 After putting myself on the line, I suffer my own slings and arrows from shop owners who disagree with my opinion on DRP issues. I have a generally positive attitude toward the original DRP model as it was intended. Unfortunately, they started out one way and ended up becoming a major profit center for insurers. I still believe they can and should be fixed.
We still blame the insurers for everything. In reality, they are just taking what we are willing to give – we are our own worst enemy. Angry shop owners who think that the DRP is the reason for their failure haven’t paid enough attention to their own bottom line.
One thing is certain – if we don’t stop using all of our energy complaining about the way things are and start working on solutions, things will continue to get worse. Shop owners can actually learn how to do business from the insurers. They are actually very good businesspeople.
I was recently in Sacramento in support of California SB 1059 (an aftermarket parts bill) with 40 to 60 other shop owners. Where were the other 11,940 shops? Of the approximately 12,000 [collision and mechanical] shops in California, less than one percent were willing to stand up and be heard. Where were the rest of you? Were you complaining about being forced to put aftermarket parts on a late model car? The insurance companies were out in force. The aftermarket parts association was well represented, along with CAPA. How can the insurers be upset if we are using the same tactics they employ?

Here’s an opportunity to stand up and be counted. California shop owners need to call their local senators and send letters asking for their support of Senator Migdon’s SB 1059. So if you have been cheering from the side lines, now is the time to get involved. Please take 10 minutes of your time to write your Senator in support of SB 1059. (There is a form letter at www.cra-ca.com.)
Get involved by paying attention to the information available on the CAA web site (www.calautobody.com), as well as the CRA website. I encourage all CAA members to join the CRA and all CRA members to join the CAA.
I encourage everyone to help Kelly McCarty get elected into the State Assembly. Her campaign needs donations from shop owners. She is $140,000 short, so if every shop sent in just $10 she would have a $ 120,000 to put her closer to her goal (www.votemccarty.com ).
It’s time to get involved. Even if you want to stay beneath the radar, there are still things you can do. Instead of arguing amongst ourselves, we can make a giant step forward. Or do nothing and watch our industry continue to struggle. As I stepped out of my comfort zone, I welcomed the challenge. At the end of the day, I will be able to say I gave it my best shot and tried to do something.
The CRA has accomplished some great things for all shop owners in California. When a few good men said “enough is enough” CRA was formed and now supports legislation being heard on the State Senate floor.
Now is the time to get involved. Now is the time for us all to take things seriously and do something – whether it’s a one-time donation or a letter to your local Senator.

In business for over 29 years, Lee Amaradio, Jr. is the president and owner of “Faith” Quality Auto Body Inc. in Murrieta, California. With 53 employees, he attributes his success to surrounding himself with good help, with some of the best office staff and techs in our industry. Amaradio has been in this industry long enough to see the handwriting on the wall. He feels that now is the time for us to unite as an industry before it’s too late.