After the Donation: The Nolan Family Uses Benevolence Car to Improve Their Lives 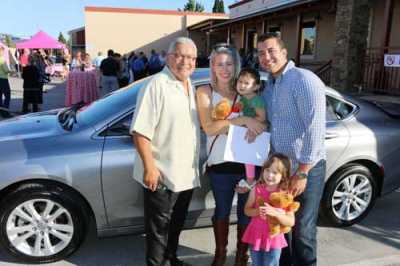 Some Benevolence cars are used by their recipients for many years as a reliable form of daily transportation, while others eventually sell them or give them to family members.

Either way, the vehicle helps these families and individuals enhance their lives while setting themselves up for ongoing success. In many ways, these vehicles enable people to pay it forward and help others after receiving the gift of transportation.

In 2016, military veteran Cassidy Nolan and his wife, Jillian, drove their 2015 Chrysler 200, donated by Hertz and refurbished by Mike's Auto Body, until their family increased in size, requiring a larger vehicle.

"We now have a third child, Colt Maximus Nolan, so we had to get a bigger car, so now we have a 2016 Ford Explorer," Cassidy explained. "But without the money we received from the sale of the Chrysler, we never would have been able to acquire our new vehicle.

"When we got the car from Mike's Auto Body, it offered us mobility and enabled us to achieve so many things that we wouldn't have been able to do. It gave us a great jumpstart. We were able to go on a couple family vacations because of that car, so it definitely improved our overall quality of life. We visited family in Chico, CA, and also visited the Monterey Aquarium and took another vacation where we drove more than 2,300 miles throughout the West over three weeks. It also gave us financial support so that we could get a new vehicle and go to the next level as I pursued my education."

At the time of the vehicle presentation, Cassidy was a student at Napa Valley Community College (NVC), and now he is on track to graduate from the University of California, Berkeley (known as Cal) next year in May. He was also the social media director of Cal Veterans Group when he received the car, but now he is the organization's president and proud of it. In this role, he is in a position to help many of the 300 veterans who are currently enrolled at Cal.

"Cal Veterans Group helps veterans work back into civilian life and re-adjust," Nolan said. "We are dedicated to providing programs and services in support of the academic and personal success of student veterans and increasing student veteran access to campus resources and enrichment opportunities. We also play a key role in campus outreach and recruitment of student veterans here at the Cal Veteran Services Center on campus."

The Nolans will never forget the day they received their Benevolence car for many reasons.

"We found out that Jillian was pregnant two days before, so we were obviously thrilled," Nolan said. "In addition, I received the 2016 Veteran of the Year for the 4th Assembly District during that same time, so it was a phenomenal moment for many reasons and a definite life-changing experience."

Nolan was sponsored by the Pathway Home in Napa, which provides veterans with educational, professional and clinical support designed to enhance their lives following military service. Eight technicians at Mike’s Auto Body also donated all of their time to refurbish the vehicle.

Now looking back on the entire experience, Cassidy and Jillian are both humble and grateful.

"This car helped us so much, and one of the best things about it is that I got to see my husband more frequently," Jillian said. "The Benevolence vehicle gave us something you can't buy, and that's time."

Cassidy wants to thank everyone at Mike's Auto Body for this unusual act of kindness, he said.

"The folks at Mike's are all about helping people, and the Benevolence Program is a prime example of that,” he said. “A car represents a lot of things---freedom, independence and the ability to have a better and more productive life, and that's what our Benevolence vehicle did. It set us up for success and it is still giving through the use of our new car."

Read 906 times
More in this category: « Marketing for Shops: Let Your Customers Become Your Brand Ambassadors With Ad Specialties Are We Going To Let Insurance Companies ‘Total’ Our Industry? »
back to top