After the Donation: Kathleen St. John Gets a Car and a Job 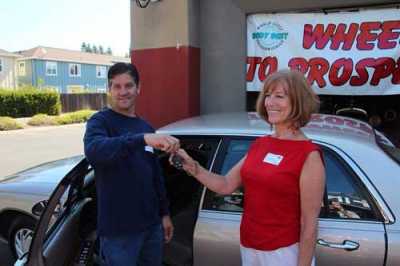 In 2012, Kathleen St. John received a completely refurbished 2003 Buick LeSabre as part of the Wheels to Prosper program. The program was established in 2011 by Dino Di Giulio, owner of Body Best Collision Center in Sonoma, CA.

In some cases, cars donated by body shops come with vehicle insurance, gas cards or gifts from local retailers. But in Kathleen St. John’s case, it also came with a job.

When Dino Di Giulio, the owner of Body Best Collision Center in Sonoma, CA, presented St. John with a completely refurbished 2003 Buick LeSabre in 2012, it changed her life in more ways than she could have ever imagined. For the last six years, St. John has been working at Body Best, a career path that began when she received her donated vehicle and her life started to improve.

Di Giulio founded his car donation program in 2011 after looking for a way to help the community and pay it forward via the gift of transportation, he said.

"I called my friend Jody Gatchell with A & J Collision to ask for help doing a car giveaway,” he said. “Jody had done a few, so I thought I would call the expert for tips and advice. He gave me lots of ideas, and I went to work on organizing my first car giveaway. But I was having trouble coming up with a name for my event---in fact, you could say I hit a wall."

A couple weeks later, Gatchell called Di Giulio on his way home from work and helped him find the program's name.

“He said, I’ve thought of a great name for the giveaway---Wheels to Prosper!” Di Giulio said. "It was the perfect name, and believe me, I was grateful for Jody’s help. The name also seemed like it could be something bigger than one car giveaway at my shop, so I thought, what if Wheels to Prosper could become an entire movement? The word ‘prosper’ means to thrive, and that is what we wanted people to do after they received the car---thrive and grow as people."

Things took off from there, and today Wheels to Prosper is a nationwide program with 60 participating shops.