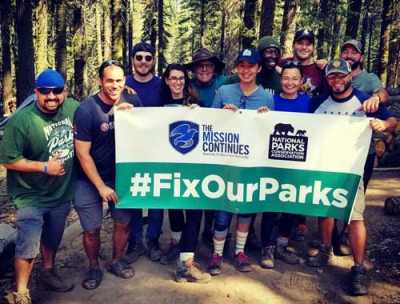 Guerrero-Uribe got his "five seconds of fame" while deployed in Iraq when he and his platoon were featured in "21 Days to Baghdad," a special produced by the National Geographic Channel.

"I'm at the end of it, saying 'Hi Mom,' and celebrating while carrying a mortar," he said. "So, that's the proof that I was there."

When Guerrero-Uribe’s tour in Iraq ended and he returned to the states, he was suffering from clinical depression and PTSD, among other problems.

"Being in Iraq was a huge rush all the time, so when I got home I couldn't adjust to the 9-to-5 pace of everyday life," he said. "I had lost my tribe, and I was lonely and became very isolated. I was hiding my pain with pain killers and started quitting jobs or getting fired."

In 2015, he checked into the West Los Angeles V.A. Hospital and started turning his life around.

"It saved my life because I didn't want to admit that I was damaged goods,” he said. “I was headed for a dark place and without the help, I might still be there. They enabled me to reset my life and understand all of the things that I was hiding from."

Today, Guerrero-Uribe uses his vehicle to deliver other veterans to volunteer at a wide range of charitable projects through The Mission Continues.

"I load the car up with vets from the Hollywood Veterans Center, and we go out to places like schools to get our hands dirty and build things," he said. "There is something going on pretty much every weekend, and it's a team effort and great therapy."

To continue his mission, Guerrero-Uribe recently submitted a fellow Marine's name for a car through the NABC Recycled Rides Program.

"His name is Mathew Shepherd, and he will be receiving his car this month," he said. "He hasn't missed any events and is working on himself, so he is a perfect candidate for a car, just like I was!"

View the embedded image gallery online at:
https://www.autobodynews.com/index.php/columnists/item/16035-after-the-donation-retired-marine-pays-it-forward-as-his-mission-continues.html?start=2#sigProIdf10e99aca2
More in this category: « Marketing for Shops: To Facebook or Not? Answers From Experts for Body Shops OE Shop Certification Programs: Porsche »
back to top