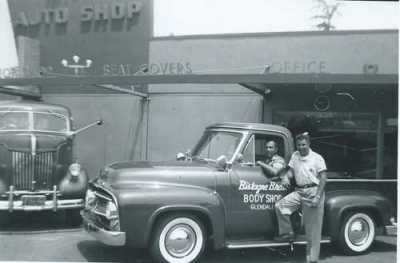 If any body shop in America can be called the quintessential post-war body shop, it’s Bistagne Bros Body Shop in Glendale, CA.

Just out of school and before that devastating December morning in Hawaii, Tom and George Bistagne were already getting their feet wet in the automotive industry. In the backyard of their Glendale home, the two brothers began customizing cars, working on the engines and chassis. They were what one might call a pair of “pioneers” in the California car craze later made famous in movies and music by such artists as The Beach Boys and Jan and Dean.

An article about the brothers in the August 1955 edition of the Western Automotive Journal reported that the brothers, “…had a free hand in operations, but not too much financial resources. They turned out some pretty smart rebuilt Fords of which they justly were proud.”

Friends saw their work, liked it and wanted the brothers to work their charm on their own cars. Before they knew it, they had a small business going, customizing cars for friends, neighbors---anyone who saw or appreciated their work. They worked days … they worked nights … they worked on weekends just to keep up. A career in automotive customizing looked promising. And then it all came to an abrupt end when Uncle Sam “requested” their services.

Eventually WWII ended. Tom emerged a captain and George as a first lieutenant. They tried to pick up where they had left off in the customizing business. But after several years of war, rationing and just plain doing without a lot of things, the market just wasn’t there anymore.  Business was “spotty” and not enough to earn a living. So they decided to drop what was not profitable and “specialize.”

Heavy engine work was dropped, as was customizing. Maybe they were visionaries and saw the future of increased post-war car sales and increased miles traveled now that gasoline was no longer rationed. Or, maybe it was just instinctive to the brothers. But they decided to concentrate on body repair and automotive painting.

View the embedded image gallery online at:
https://www.autobodynews.com/index.php/columnists/item/15852-oldest-body-shops-in-america-bistagne-bros-body-shop.html#sigProId927cbcafce
More in this category: « Retro News: A Decade Ago, a Different National Association Sought to Replace its Executive Director SURVEY: John Eagle Decision’s Impact on Shop Practices »
back to top