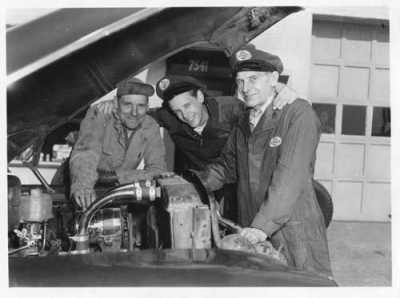 From November 2017 to February 2018, Autobody News ran an ad looking for the oldest continuously operated body shops in America.

The oldest was George V. Arth and Son in Oakland, CA, founded in 1877 and still going strong. However, we received information from a number of other long-running businesses, several of which will be featured in this column over the next few months.

It was 1914. Ford Motor Company initiated the eight-hour work day. A worker on Ford’s assembly line made a minimum of $5 per day---good wages and hours in those times. Babe Ruth made his debut with the Boston Red Sox and WWI was under way in Europe.

At one point, Michael decided to build trailer hitches for the new motorized vehicles. It was not uncommon for service garages to have other “side lines” of work. In one season in 1939, he built 80 to 100 trailer hitches. His fame at this type of manufacturing spread over northern Ohio.  Eventually, Ralph’s son, Dale, also joined in the family business and has been the owner since the mid-1960s. While running the business, Dale was also a vocational automotive school teacher for Valley Forge High School, in Parma, OH. Some of his students are still working for Dale in the body shop, mechanical and towing department.

Dale is the third-generation owner. Dale’s sons, Dale Jr. and Gary, are currently working at the business, looking at taking over as the fourth-generation to own Sirl’s.

Sirl’s Automotive is documented as being the third-oldest towing company in the United States.

Sirl’s Automotive is currently a full mechanical and collision repair shop, along with 24-hour towing service. Sirl’s Automotive has ranked on the Towman 500 "Most Experienced Towmen in America.”

View the embedded image gallery online at:
https://www.autobodynews.com/index.php/columnists/item/15533-oldest-body-shops-in-america-sirl-s-automotive.html#sigProIdf1119c315d
More in this category: « Marketing for Shops: Does Email Marketing Work for Body Shops Anymore? Retro News: 5 Years Ago, Shop Wanted to Choose Parts Systems Rather Than Face Insurer Mandates »
back to top