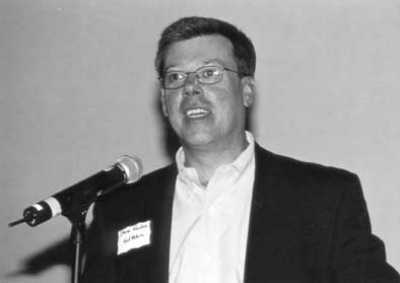 In 2003, Steve Nantau said Ford Motor Company was expanding the amount of collision repair manuals it was making available to the industry.

20 Years Ago in the Collision Repair Industry (April 1998)

Roger Wright of Integon Insurance agreed that the existence of non-OEM parts may have resulted in higher prices for some OEM parts for which there is no non-OEM version.

“That’s why moldings are $200,” Wright said. “It’s interesting: When you look at the gross parts dollars combined [for OEM, non-OEM and salvage], it’s still about the same part of the estimate as it was before non-OEM and salvage parts were used extensively. But what if we say, ‘Okay, let’s not use non-OEM; let’s just use OEM.’ What’s going to happen to parts pricing then? We’re just scared of that as an industry.”

He said insurers do have some other leverage regarding parts pricing by informing vehicle manufacturers how the choices they make affect insurance premiums for a particular vehicle. He said insurers contacted one manufacturer about higher claims cost for vehicles that didn’t have break-away mirrors.

“We said if you want to continue to have this as an insurable vehicle, you have to put the break-away mirrors on, and they did,” Wright said. “Can we do the same thing if they start raising the price of parts? Can we make the car uninsurable from a customer stand-point? Yes. So there is a little leverage there.”

– As reported in The Golden Eagle. Wright was speaking during a panel discussion regarding non-OEM parts during an Automotive Service Association annual meeting. Wright later worked for other insurers (including AIG) and collision repair chains (CARSTAR and Sterling Auto Body) before forming Vector Squared, an independent consulting firm, in 2014.

15 Years Ago in the Collision Repair Industry (April 2003)

Accessibility to OEM repair information continued to be a topic of discussion within the industry and at the Collision Industry Conference (CIC) in Phoenix in April. In a presentation for the CIC “OEM Committee” on how Ford Motor Company takes collision repairs into account when designing vehicles, Steve Nantau, collision repair supervisor for the automaker, said his company now has repair manuals available for many of its models and expects to have manuals for all models by the end of this year.

Bill Haas of the Automotive Service Association pointed out that 22 automakers currently have service and repair information available to shops via website. Subscriptions for access average about $20 a day and offer shops immediate access to the specific information they need. He cited an example of a shop that had replaced a door on a 2002 Nissan Altima but couldn’t get the power window to open or close completely.

“That procedure is available on the Nissan website. So the technician was able to access that service information immediately, go back to the vehicle, perform the relearn procedure and make that car deliverable.”

– As reported in Autobody News. Nantau retired from Ford, and Haas is now an independent consultant and trainer. Links to OEM information websites for more than three dozen automakers can be accessed via www.OEM1stop.com.

10 Years Ago in the Collision Repair Industry (April 2008)

Mitchell International and CCC Information Systems say they will continue to operate independently for the next 2--6 months until the merger the two companies have announced is approved by regulators and finalized later this year. At that time, CCC’s CEO Githesh Ramamurthy will become CEO of the new “CCC-Mitchell, Inc.,” and current Mitchell CEO Alex Sun will become president of the new company.

Termed a merger-of-equals, its new board will have equal representation from each of the two private equity firms that currently back CCC and Mitchell. Longer-range plans reportedly being discussed within the companies include creation of a new common electronic estimating platform that will use Mitchell’s database.

One side note to the CCC-Mitchell announcement: Sources say that just such a merger was something Tony Aquila unsuccessfully worked to make happen while chief operating officer at Mitchell in 2003--04. After leaving Mitchell, Aquila founded Solera, now the parent company of Audatex, which now must compete against the merged CCC-Mitchell.

– As reported in CRASH Network (www.CrashNetwork.com), April 14, 2008. A year later, the two companies cancelled the planned merger after the Federal Trade Commission (FTC) moved to block it; the FTC said it had an “impressive body of evidence…demonstrating that the combination of these two competitors would substantially lessen competition, ultimately leading to higher prices and less innovation for consumers.” Ramamurthy, Sun and Aquila remain in their positions at CCC, Mitchell and Solera Holdings, respectively.

5 Years Ago in the Collision Repair Industry (April 2013)

Because Arizona shop owner Dan Hunsaker had spoken negatively at several industry meetings about his experience with PartsTrader, he was asked why he stays on the State Farm program.

“At this juncture, I don’t see the benefit of being a sacrificial lamb, and then having them six months from now say, ‘You know, this isn’t working; we’re not going to continue with it,’” Hunsaker said. “I’m taking a wait-and-see attitude. If this thing goes national, then I’ll sit down and pencil it out, and I will make a very informed business decision.”

View the embedded image gallery online at:
https://www.autobodynews.com/index.php/columnists/item/14951-retro-news-oem-info-websites-have-existed-for-15-years.html#sigProId642cc9e377
More in this category: « Hey Toby! Kool Tools: SEMA 2017 When Was the Last Time You Updated Your Website? »
back to top