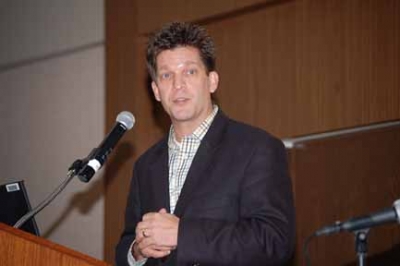 In 2013, Bill Shaw was president of the Collision Industry Foundation and seeking donations to help those in the industry impacted by Superstorm Sandy.

20 Years Ago in the Collision Repair Industry (February 1998)

A new Collision Industry Conference (CIC) committee has been established to consider alternatives to the current method of calculating refinish materials.

The committee, which will include representatives of all segments of the industry, was proposed by California shop owner Al Estorga. Estorga said that late last year he attended a two-day meeting on the issue organized by Motor Information Systems.

“At the end of the (meeting), it was evident to everyone in the room that we needed to try to find an industry solution,” Estorga said.

Motor’s Phil Cunningham said his company hopes to avoid the confusion that could result from the development of multiple refinish materials calculation methodologies.

“You’d have Mitchell’s solution and Motor’s, and I’m sure that ADP will jump into the fray and they will develop their own,” Cunningham said. “So then you’d have three solutions out there and a lot of confusion. What we thought would be prudent is if before we take off down the road to develop our own solution, we should have a dialogue that says, ‘Can we have an industry solution that everyone can work with and avoid the confusion?’”

The committee will have to address several concerns raised by CIC participants before moving further. First, any antitrust or other legal issues involved in such an undertaking will have to be reviewed. Second, CIC participants questioned whether the methodology can change without changing the bottom line dollar figure, something that is likely to be opposed by either shops or insurers.

“But if we don’t do it, we’re going to end up with three systems,” CIC Chairman Erick Bickett said.

– As reported in The Golden Eagle. A wide variety of alternative methods of calculating refinish materials have been proposed over the years, but no single one has gained widespread usage. Only about 1-in-5 shops, for example, report using an alternative materials calculator / invoicing system.

15 Years Ago in the Collision Repair Industry (February 2003)

Collision repair shops are being asked to review their sales records for all non-OEM hoods manufactured by Jui Li for the 1995--2000 Toyota Tacoma and purchased between August 1997 and last March, and to notify those vehicle owners that the hood, which was CAPA-certified, is being recalled.

About 5,000 of the hoods could be involved in the voluntary recall, which is the first formal recall of a non-OEM crash part. It was found that if the primary hood latch is not engaged, the secondary latch on the part may not be positioned properly to prevent the hood from flying up.

The look into the part was launched last spring after it was reported that the secondary safety latch on one such hood failed during a shop test drive of a vehicle. Investigation by CAPA and the distributor found the distance between the striker and the secondary hood latch was off by about one-tenth of an inch, enough to keep the latch from catching sufficiently to hold.

– As reported in Northwest Automotive Journal. Both CAPA and parts certifier NSF have developed parts-tracking mechanisms for the non-OEM parts they certify to assist in any recall of such parts.

10 Years Ago in the Collision Repair Industry (February 2008)

A U.S. House subcommittee held a hearing last week on whether patent law changes are needed to protect certain industries. A coalition of insurers and non-OEM parts makers and sellers is calling for a change to allow use of a matching exterior part to repair a vehicle without infringing on patents the automakers hold on particular OEM parts.

Speaking at the hearing on behalf of several consumer groups, Jack Gillis told lawmakers the change is needed to maintain competition in the face of increasing patent filings by automakers, which, if allowed to stand, will drive up parts prices and the number of vehicles declared totals.

“Ford charges the same price for a fender as Dell charges for a high speed computer, flat screen monitor and color printer,” Gillis told lawmakers. “A simple grill for your Toyota costs the same as a combination flat screen TV and DVD player. A Sears refrigerator-freezer with an icemaker is the same price as an unpainted door skin from Chrysler.”

– As reported in CRASH Network (www.CrashNetwork.com), February 18, 2008.  The non-OEM parts industry has continued to fight for federal legislation that would slash design patent protection automakers’ hold on crash parts; the legislation was most recently the subject of a Congressional hearing in early 2016. Contrary to concerns raised by Gillis, however, the percentage of vehicles declared a total loss has remained fairly steady---between 14 percent and 17 percent throughout the last decade.

5 Years Ago in the Collision Repair Industry (February 2013)

The Collision Industry Foundation is seeking donations to assist shops devastated last October by Superstorm Sandy. PPG’s Bill Shaw, president of the Foundation, said some shops were without power for up to three weeks, and some were closed for up to seven weeks. Some were inundated with up to 6 feet of water, a combination of storm surge and sewer back-up, destroying equipment and resulting in all the vehicles on their property being declared total losses.